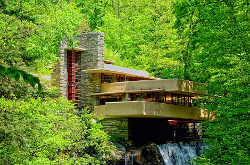 
American architect Frank Lloyd Wright designed more than 1,000 buildings and other structures during his lifetime.

One of the most famous is Fallingwater, a house in rural southwestern Pennsylvania.

Wright designed the house in 1935. Fallingwater is not near a big city and not easy to travel to. But it is worth the time and effort needed to find it.

The house is called Fallingwater for a reason: it sits on top of a waterfall, created by a mountain river named Bear Run. The waterfall is actually part of the house. You can hear it in one of the bedrooms. You can see it under your feet in the living room.

Edgar and Lillian Kaufmann owned a large store in Pittsburgh, Pennsylvania. They asked Frank Lloyd Wright to design a home for them that they could visit on weekends. Wright combined the waterfall into the house.

The structure was so interesting that it and Wright were on the cover of Time magazine in 1938. Many famous people visited Fallingwater, including scientist Albert Einstein, actors Ingrid Bergman and Marlene Dietrich, and then-President Franklin Delano Roosevelt.

Today, Linda Waggoner is the director of Fallingwater. She told VOA that the house was everything the Kaufmanns wanted.

“It just fit them like a pair of custom shoes, fit their lifestyle and what they wanted to achieve here, which was an immediate integration and relaxation in nature.”

The home combines human-designed forms with things found in nature, such as stone, flowers and water. It has many open spaces, filled with light and air. Instead of art or photographs on the walls, there are large windows.

Fallingwater has been a museum since 1964. Smithsonian Magazine said it is one of the few places that Americans must see. Over the past 50 years, more than four million people have done so.