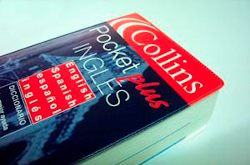 
Spanish/ has been spoken/ in the United States/ since eighteen-oh-three. That is the year/ the United States/ bought a huge area of land/ called the Louisiana Purchase. Spanish settlers/ in the area/ became part of the new nation.

Today, Spanish/ is the second most common language/ used in the United States, after English. Experts say/ the reason is /because many Spanish-speaking people/ have moved/ to the United States/ to live.

Americans/ describe people of Spanish ancestry/ as Hispanic. Latino/ is another word/ used to describe people/ with roots/ in Spanish-speaking countries.

One important issue/ is how to improve education/ for the children/ of Latino immigrants. A national debate/ continues/ about how best to teach English/ and other subjects/ to Spanish-speaking children. Studies show/ that Hispanics/ in the United States/ complete high school and college/ at lower rates/ than other ethnic groups.

The popularity of Spanish/ is having a lasting influence/ on English speakers/ in the United States. Many non-Hispanic children and adults/ are learning and speaking Spanish. It is one of the most popular foreign languages/ that students study/ in school. It is being used increasingly/ in business, and in both national/ and international politics.

And business leaders/ are recognizing the growing importance/ of selling/ to what is now America's largest minority group. The number of Spanish-language programs/ are increasing/ on radio and television. And, Latinos/ are gaining influence/ in cultural and political life/ in the United States.