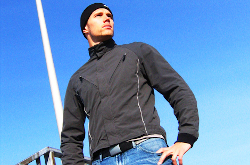 
We have known for a long time that our body posture -- the way we hold our bodies when we sit, stand or walk -- tells the world a lot about us.

But can our body posture affect the way we see ourselves? A social psychologist named Amy Cuddy believes it can. And she wants to share this information with the world.

More than 24 million people have viewed Amy Cuddy’s TED talk on power posing. It is the second most viewed TED talk in the history of all TED talks. TED is a non-profit organization with one goal: to spread ideas in the form of short talks.

The power of the “power pose” has taken on a life of its own. Ms. Cuddy speaks all over the world sharing the power of the two-minute power pose. She says her goal is to empower the powerless.

Before facing your next stressful situation or a difficult challenge, Ms. Cuddy wants you to take two minutes to power pose. Spread your arms wide above your head as if you are winning a race.

Or, stand like the superhero Wonder Woman with hands on hips and feet shoulder-width apart. Hold these poses for at least two minutes. According to research by Ms. Cuddy and her colleagues your brain chemistry will change, giving you more confidence.

Amy Cuddy is a professor at Harvard Business School. Back in 2010, she became interested in male and female body language from watching students in one of her classes. She said, for the most part, the men held power poses. These students would take up a lot of physical room in the class. They would raise their hands and answer questions.

Ms. Cuddy said the female students, for the most part, did the exact opposite. They sat with their legs together and made their bodies as small as possible. They seemed unsure when they raised their hands to answer questions.

So, she set up an experiment with Dana Carney, then a social psychologist at Columbia University. The two women wanted to know if a person’s body language affected the brain’s chemistry.

They asked 42 men and women to randomly hold high- or low-power poses. The researchers did not tell any of the participants in the experiment what they were testing. People in the high-power pose group held poses such as putting their feet on a desk with their hands behind their heads or stretching arms out wide as if winning a race.

People in the low-power group held poses such as sitting in a chair with arms held close to the body with hands folded or standing with arms and legs crossed tightly.

Both groups held the poses for two minutes. Then Ms. Cuddy and Ms. Carney tested hormone levels of the study subjects. The brain chemistry of both groups had changed.

The researchers found that two minutes of high-power posing lowered the stress hormone cortisol and increased levels of testosterone. Also, all the subjects in the high-power pose group said they felt powerful and in control after the pose. They also took more risks during the experiment.

Lower-power posing did the opposite -- it raised cortisol levels and lowered testosterone levels. These low-power posers also took fewer risks during the course of the experiment.

How do these chemicals affect the brain? Too much cortisol interferes with learning and memory. High cortisol levels also increase the risk of depression and mental health problems. Testosterone, on the other hand, is the hormone linked to assertiveness and confidence.

Ms. Cuddy, Ms. Carney and another Columbia University researcher, Andy Yap, co-wrote the 2010 study. It was published in the journal “Psychological Science.” Ms. Cuddy and her colleagues found that body language and posture can temporarily change the chemistry of our brains.

Ms. Cuddy has said her goal for researching this subject was not to create testosterone-driven, super-competitive people. She has said that this research can have real life-changing effects on people who feel powerless -- people who are healing from an illness, facing a job loss, or dealing with abuse or bullying.

She adds that anyone needing higher confidence levels -- from athletes and performers to people heading into a job interview -- could benefit from power posing.

She knows the imposter syndrome well. At age 19 while in college getting her undergraduate degree, Ms. Cuddy was in a serious car accident. The accident left her with a severe brain injury.

Doctors advised her to give up her dreams of getting an advanced degree and take another path in life. She says she was always known as an intelligent girl and good student. The news was difficult to hear.

Finally, Ms. Cuddy decided to stay in college. She worked hard and, even though it took her four years longer than everyone else, she finally got her degree. She wanted to get her Master’s degree at Princeton University and found an advisor who believed in her.

But Ms. Cuddy lost her nerve. She told her advisor she wanted to quit. She felt like an imposter who was not good enough to be at Princeton. Her advisor ordered her to go to class and to just fake it. Fake it till you make it, is the expression her advisor used.

Ms. Cuddy continued “faking it,” getting more and more confident. She faked it all the way to Harvard Business School where she is now a professor. Then Ms. Cuddy simply forgot to fake it.

She forgot until one day when a female student came into her office and said she wanted to quit.

This student said she felt as if she didn’t belong. Ms. Cuddy told the girl, “You do belong!” and gave the student the “fake it till you make it” speech that Ms. Cuddy’s advisor gave her all those years ago.

It was at that moment Amy Cuddy realized that finally she had made it. She no longer felt like an imposter. She had become the person she wanted to be. She has since changed the expression to “fake it till you become it.”

Amy Cuddy urges people to share the information on power posing with anyone who may need to feel more powerful. It is simple, free and might be life-changing.