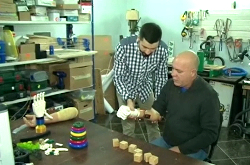 
Accidents in which people lose an arm or leg often take place in communities with large numbers of poor people.

In such areas, victims may not have enough money to pay for costly prosthetic replacements. But two men from Belarus have used simple and easily available materials to make a prosthetic arm. Almost anyone can build one of the limbs at home.

Oleg Galtsev was four years old when his father Sergei lost his arm in an explosion on a military firing range. At the time, Sergei Galtsev was an army captain in the former Soviet Union.

Almost 30 years later, he is using a prosthetic arm designed by his son and another engineer.

He says “They gave me the prosthesis to test for three weeks. I used it to saw firewood, cut the grass and to do many other things in the field.”

The mechanical arm looks nothing like the new prosthetics available in industrial countries. But it is easy to make, has a low cost, and does not need much maintenance.

Oleg Galtsev says the device is designed for people who do not feel at ease with electronics.

Galtsev says it took two years to design the prosthesis. They used a 3-D printer to create some parts and bought others online.

The creators did not ask for a legal patent to control ownership of the device. In fact, they have published directions on how to make it online. They say it costs just one-tenth of the price of other mechanical prostheses.

Sergei Galtsev says he can now perform many outdoor activities, including using a chain saw to cut tree limbs.

“I am proud that my son decided to tackle this problem. There are many people who really need this device in their daily lives.”

Oleg Galtsev says many people have watched videos of his prosthetic arm invention on YouTube. He says he hopes his work will influence others to invent new prosthetic devices.