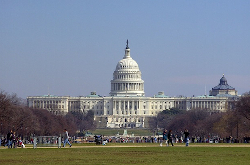 
In the United States during an election, voters go to the polls to cast their votes.

When deciding on which candidate to support, voters consider many things. They consider the issues a candidate supports. They also consider from whom the candidate receives money or campaign donations.

And that brings us to our word for this Words and Their Stories. It’s a political word: “lobby.” “Lobbying” is an attempt to influence a legislator’s vote on a bill.

Lobbying has been a legal activity since the earliest days of the United States.

The First Amendment to the Constitution says that no law may prevent people from petitioning or requesting the government to change things the people feel are wrong.

The right of the people to petition the government has led to lobbying. Lobbying is a type of free speech.

English speakers have used the word “lobby” for almost 400 years.

Besides politics, a lobby is also part of many large buildings. Many apartment buildings and hotels have lobbies. You can also meet your friends in the lobby of a theater or concert hall during the intermission of a performance. This, however, does not make you a lobbyist.

During the early years of the United States, lobbyists had a bad name. There were many cases of lobbyists buying the votes of lawmakers. They were seen by the public as dishonest people who influenced legislation illegally for their own private gain.

In later years, Congress and state legislatures passed laws to restrict dishonest lobbying activities. Lobbyists must register with the government and they must follow many complex regulations.

Lobbyists and lobby groups have an active part in making laws. They help inform Congress and the public about problems and issues.

Lobbyists provide technical information about legislative proposals. And lobbyists let lawmakers know whom a bill would help and whom it would hurt.

A lobbyist represents a group and tries to advance its interests. When a bill is proposed that affects that group, a lobbyist meets with lawmakers to explain the group’s position.

There are so many lobbyists that almost every side of an issue is represented. Some experts say the number of registered lobbyists is decreasing.

However, other experts don’t agree. They claim the number of lobbyists actively lobbying the U.S. government is actually growing. However, to avoid the lobby registration system and regulations these lobbyists have gone underground -- or they do their lobbying out of public view. This does not help their public image.