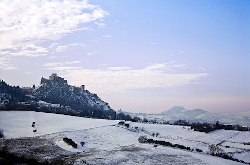 
Today, we are going to celebrate the coming of winter with expressions related to cold and ice. And we will do that with a story … a mystery story.

This is part one of a three-part series. Our story begins on a distant mountain-top. It is the dead of winter. Outside the wind is howling.

Snow mixed with freezing rain has made the roads unsafe for travel. Even walking outside is dangerous. So, the four characters of our story are stuck indoors at The Ice Castle Inn. Like the name suggests, the inn is an old castle. But now it is a vacation spot for bird-watchers.

These four people are strangers. The only thing they have in common is a shared interest in snow birds. But for now, they all have put their bird watching plans on ice. That is to say, they must postpone their plans until the winter storm passes.

What they don’t know is the violent storm outside is just the tip of the iceberg. In other words, more danger exists, but they cannot see it.

But now, let’s get in out of the cold. As we enter the Ice Castle Inn we meet our group of travelers. They are all having a hot drink as they gather by the fireplace.

First there is the teacher, Madeline. She is in her late 20s and teaches skiing and cold weather survival skills at a private school for girls.

Her neat, dark hair frames her round, healthy face. Her appearance is plain but she is in great physical shape. She is a quiet woman. When she speaks, her voice is low and uncertain. You may think she is shy. But think again.

Underneath her shy exterior, she is calm, cool and collected. If she stares at you with her clear green eyes, you can sense her powerful, extreme calm. Her ability to control her reactions makes people feel afraid: it sends shivers down their spines.

Then there is the athlete, Vincent. He is in his early 30s. Handsome and active, he talks to anyone and everyone. He has an easy manner and people like him instantly. He’s the type of man who could sell ice to an Eskimo, meaning he could talk you into anything.

At first, he seems to be a very cool, easy-going sportsman. But talk to him more and you realize that something is missing: namely, feelings. Those who know him best say he has ice water running through his veins. Nothing seems to upset or emotionally move him.

Next is the actress, Sylvia. She is in her mid-40s and is extremely attractive. With her ice-blue eyes, pale white skin and fine clothing, she doesn’t seem like the outdoorsy, bird-watching type.

Her personality runs hot and cold -- friendly one minute, unfriendly the next. You never know what to expect. The one thing that is constant about her is the gold locket she wears around her long, thin neck. She never takes it off and often holds it tightly to her chest.

Finally, there is Major Jack, an ex-military man. His age is hard to guess -- perhaps 50-something? He has a strong jaw and thick black hair. The lines on his face make him look older but even more handsome. Some men are just lucky that way.

He seems like most military men; strong and silent. William Shakespeare might even call him a cold fish -- unfeeling and unfriendly. But at the same time every day, as the sun goes down, he stares out the window into the storm with great sadness in his eyes. It is at these times, he seems like a man left out in the cold, ignored and alone.

That is our small group of traveling bird-watchers. As the days pass, the snow only falls harder on The Ice Castle Inn. The land line phones no longer work. Neither do cell phones. No rescue vehicles have come to clear the roads. They are truly snowed in.

With each passing day, they become more and more suspicious of each other. They all wonder the same thing -- why are the others really here? Answers will have to wait.