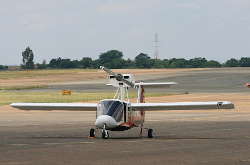 
Airbus says it plans to test a prototype of a self-flying vehicle to transport people in the sky above busy city streets.

Testing of the “air taxi” is expected to begin before the end of the year, according to Airbus chief executive Tom Enders.

“One hundred years ago, urban transport went underground, now we have the technological wherewithal to go above ground,” Enders recently told a technology conference in Germany. His comments were reported by Reuters.

Enders said that while Airbus is just starting to experiment with flying vehicles, it is taking the developments “very seriously.”

France-based Airbus is one of the largest airplane manufacturers in the world. It makes commercial aircraft, helicopters and space equipment.

The flying transporter project is being led by the company’s Urban Air Mobility division. The division was launched last year to explore the use of personal flying machines and helicopter-style vehicles in the future.

The vehicles would be part of a taxi-style service allowing riders to book through an app, the same way as car-sharing companies.

He said his company is investing now in autonomous flying technology to prepare for the inevitable future of self-flying vehicles.

“If we ignore these developments, we will be pushed out of important segments of the business,” Enders said.

He added that flying vehicles can greatly reduce costs for city infrastructure projects like roads and bridges. Airbus is looking at using electric vehicles to avoid adding more pollution to crowded cities.

Another Airbus official predicted that in as little as 10 years, flying vehicles will be on the worldwide market to “revolutionize urban travel for millions of people.”

Last October, ride-sharing company Uber announced plans to use flying vehicles in the future to avoid ground traffic around cities.

Uber’s plan would use small, fully electric aircraft that could take off and land like a helicopter, without the need for long runways. The company said its flying vehicles would also be much quieter and less polluting than helicopters.

Uber has said its planned flying service -- which would eventually use pilotless aircraft -- could launch within 10 years.