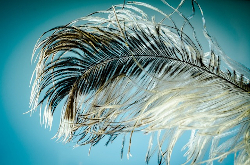 Bird feathers have long been used in clothing and in bedding. Manufacturers often use feathers because of their light weight and the warmth they provide in a cold room or climate.

Now, two students in Britain are studying how to use them in other ways, like keeping homes warm, for example.

Chicken is a popular food in many countries, and the number of poultry killed for their meat is rising.

Two students from Imperial College London want to turn these feathers into something useful.

Elena Dieckman and Ryan Robinson are each working toward a Doctor of Philosophy degree, or PhD. They are the founders of a start-up company called Aeropowder.

The two had an idea to create useful materials from waste. They developed a biodegradable product that could replace man-made insulation. Biodegradable materials are capable of being slowly broken down through natural processes.

Builders usually add insulation to homes and offices. The insulation can reduce the energy demands of heating and cooling systems.

Dieckman and Robinson won several awards for their prototype insulation, including the Mayor of London's Low Carbon Entrepreneur Challenge. The $23,000 they won in the competition helped them start their company, Aeropowder.

Elena Dieckman explains why feathers are a useful material: "Feathers are a real wonder material. They are designed by nature to protect birds from really harsh environments. So they are super lightweight, they're thermally insulating, they're water repellent, bio-degradable. So it's a really great material."

Robinson adds that their goal is to develop ways to use the entire feather, not just parts of it. If successful, Aeropowder may help prevent the waste of this useful natural material.