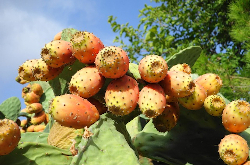 
In the future, chemicals from plants found in and around the Mediterranean may be used to help treat people with brain diseases such as Alzheimer's and Parkinson's.

People suffering from Alzheimer's and Parkinson's have deposits of sticky plaque in their brains. Over time, this plaque reduces brain function. Eventually, it causes death.

Researchers then tested the extracts in fruit flies that were genetically changed to develop symptoms of Alzheimer's.

They found that when the flies were given brown seaweed extract, their lifespans increased by two days. Prickly pear helped the insects live four days longer.

That may not sound like a long time. However, the researchers remind us that one day in the life of a fruit fly is equal to one human year.

Researchers also noted that movement in some of the diseased insects improved. They reported their findings in the journal Neuroscience Letters.

Researchers say that the sticky plaques in both Alzheimer’s and Parkinson’s diseases appear to form through the same biological pathways. Targeting these pathways, they say, is the best way to fight the diseases.

The lead author of the study is Ruben Cauchi of the University of Malta's Center for Molecular Medicine and Biobanking. He says the Mediterranean plant extracts are already used in health foods and some cosmetics. So, they are very safe.

The research team is working with a company that extracts the chemicals for commercial use as so-called "fountain of youth" products.