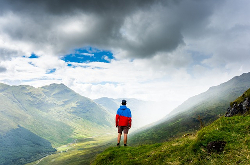 This is especially true if they are wearing synthetic clothes--ones made of material not found in nature. These materials, like polyester, are designed to be lightweight, to move sweat away from a person’s body, and to dry quickly.

But these clothes can keep that bad smell a body makes when it sweats. What causes the smell? Bacteria.

For years, manufacturers have been making exercise and travel clothes with different kinds of anti-odor technology. Some add chemicals or put small holes in the garments to allow the sweat and smell to escape. Others use threads or small pieces of silver in the fabric.

The goal is to make clothes that one can wear longer without having to wash them. That might not sound very pleasant. But it helps people who are carrying all their supplies for camping in the wilderness.

Carl Botterud is such a person. For ten years, the California lawyer and his son have been camping in the High Sierra Mountains for a week at a time. Packing light, he did not want to take six pairs of underwear.

“I was looking and found underwear that promoted its properties as comfortable, quick drying and doesn’t smell so you can wear it for multiple days while you’re out packing. So that sounded terrific. I bought a couple pair and they worked exactly as advertised.”

Now he wears them every day at home too. “Now, when I’m at home I don’t wear them three days in a row, but they’re very comfortable when I exercise, going for hikes or long walks or going to the gym.”

Paul Westerhoff is a professor of Environmental Engineering at Arizona State University. He researched the effectiveness of silver in clothes to kill bacteria and how it impacts the environment. The study was published in Environmental Science & Technology last year.

Researchers use zebrafish embryos to test whether a drug is toxic for humans. In the study, Westerhoff found the fish embryos were not harmed when exposed to silver in wastewater.

He says silver is “quite toxic,” or harmful, to bacteria -- but not for humans. It is also used in bandages and food packaging. In clothing, silver releases ions that kill the bacteria, and the smell.

Silver is used two ways in clothing. One uses a long thread of silver to cover a large area of the material. The other coats all the fibers with very small pieces of silver, called nanoparticles. They cannot be seen with your eye.

Some of the silver gets washed away with the washing machine water. Researchers wanted to know if that makes the cloth less effective. So they washed the garments, many times.

“Even after six and up to 20 washings you still kill over 99 percent of the bacteria, in most cases.”

Westerhoff says the nanoparticle silver looks like a “better” choice. Much less silver is needed for each piece. That costs less, and there is less silver released into the wastewater.

He is concerned about the impact of silver on the environment, but he says there is a process to take care of it.

“(But) we’ve done studies to show that most of this silver will go to a wastewater treatment plant where it gets removed with the bacteria/ and it’s pretty regulated in terms of where they go.”

Now Westerhoff says he wants to find out if people really would wash their clothes less if they do not smell. Less washing helps the environment because less hot water is used, there is less wastewater and less energy is used to dry the material.

Washing synthetic clothes less often would also mean less microfibers escaping with the wash water. Recent studies show that very small pieces of these synthetic fabrics come off every time they are washed. These microfibers are plastic, and are finding their way to rivers, oceans, into fish and even table salt in China.

Both manufacturers and environmentalists are working to find solutions to this problem.

Some people are going back to wearing more wool, a natural fabric, for outdoor activities. In the U.S., companies are making garments with merino wool--it is softer, lightweight and does not itch--or hurt your skin.

Emma Walker is a writer and outdoor athlete. She says wool is “really comfortable” and does not smell.

“I can wear a wool base layer next to my skin for days at a time without ever taking it off when I’m in the back country and it doesn’t itch.”

And she says except for on the hottest summer days, she can still stay cool in wool.

Rita Kourlis Samuelson works at the American Wool Council. Because bacteria are not attracted to wool, she says, it does not smell when you do.

“You can wear wool and not wash it. I mean we have even had people wear a wool shirt for a hundred days, claiming that they’re odor free.”

While they may favor one kind of fabric over the other, many athletes wear both wool and synthetics, depending on where they are, and what they are doing.