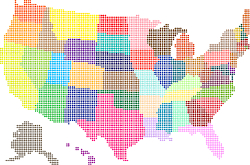 A new study has found that how long Americans live depends on where they live.

Researchers at the Institute for Health Metrics and Evaluation or IHME at the University of Washington in Seattle found that the gap between counties with the highest and lowest life expectancies is larger now than it was in 1980.

And life expectancy is falling in some counties. The researchers say this shows there is a large and growing inequality in the health of Americans.”

There has also been a drop in the life expectancy rate in counties in poor areas of Kentucky and West Virginia. In Owsley County, Kentucky, life expectancy was 72.4 years in 1980. But by 2014 it had fallen to 70.2.

Dr. Ali Mokdad is one of the authors of the study. He says the findings demonstrate an urgent need “to reduce inequality in the health of Americans.”

He says “federal, state and local health departments need to invest in programs that work and engage their communities in disease prevention and health promotion.”

The study showed that spending more money on healthcare does not appear to increase life expectancy.

The United States spends more per person on health care than many developed countries -- $9,237 per person in 2014. That compares to $4,032 spent by Australia, which has a life expectancy of 82.3 and Japan, which spent $3,816 and has one of the highest life expectancies in the world at 83.1.

Laura Dwyer-Lindgren is a researcher at IHME and one of the authors of the study. She says examining “life expectancy on a national level masks the massive differences that exist at the local level, especially in a country as diverse as the United States.

Risk factors like obesity, lack of exercise, high blood pressure, and smoking explain a large portion of the variation in lifespans, but so do socioeconomic factors like race, education and income.”

Dr. Christopher Murray is the director of the IHME. He says “the inequality in health in the United States -- a country that spends more on health care than any other -- is unacceptable.

Every American, regardless of where they live or their background, deserves to live a long and healthy life. If we allow trends to continue as they are, the gap will only widen between counties.”