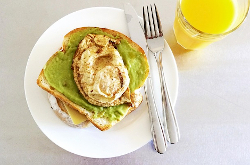 
Avocado toast is a popular thing to eat in some parts of the world. It is very easy to make.

You find some good, thick, bread and you toast it. Then you take an avocado fruit, cut it open, and remove the soft, green part. You mash it on top of the toasted bread. You add salt and pepper and, if you want, put an egg, tomato or meat on top. That is it.

Avocado toast is on the breakfast and brunch menus at many popular restaurants. And, in some places, it costs about $15 per serving.

This week, an Australian investor who buys and sells houses and builds buildings told a news program that young adults -- or millennials -- should stop eating avocado toast and start saving their money so they can buy a home.

Tim Gurner is 35 years old. He has already made hundreds of millions of dollars in his career.

He told Australia’s 60 Minutes, “When I was trying to buy my first home, I wasn’t buying smashed avocado for $19 and four coffees at $4 each.”

Some young people are insulted by Gurner. They say that he is accusing them of not being smart with their money.

Twitter user Kaleb Horton wrote: “If I stopped eating avocado toast every day, I would be able to afford a bad house in Los Angeles in 642 years.”

Other people on social media explained that they do not spend their money on avocado toast. Instead, they spend it on things like rent, college loans and transportation.

TIME Magazine wrote about Gurner’s comments. It reported on research by investment firm Goldman Sachs, which shows that young people have different values than older generations.

When people who are 60 years old today were in their 20s and 30s, they chose to buy homes and cars, TIME wrote. Today’s 20 and 30 year olds, however, value life experiences over things.

And The New York Times reported that millennials -- people between the ages of 18 and 34 -- do not actually spend any more money on travel and eating at restaurants than earlier generations.

It also said “it would take a lot of skipped avocados to put a dent in the heavy costs of home ownership.” And it said that investing in a home is not always a good financial decision.

The New York Times story did suggest, however, that fans of avocado toast would be better off saving money and making their own breakfast at home. As one Twitter user wrote, homemade avocado toast only costs about $1.65.