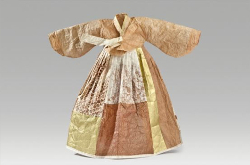 The traditional Korean paper called Hanji was once famous across Asia for its strength and ability to be used for multiple purposes.

But Korean-American artist Aimee Lee is dedicated to continuing the 2,000-year old tradition through her artwork and teaching. And some of the artwork she creates using the paper can be worn as clothing, she says.

“The very first dress that I made out of Hanji was a western dress. But as I was making more dresses, I thought just in the way that I explored Korean paper … I thought it would be wonderful to explore Korean dress.”

The dress and Lee’s other artwork created with traditional Korean paper are part of a group exhibition. It is being shown during the month of May at the Korean Cultural Center in Washington, DC. The exhibition marks the celebration of Asian American and Pacific Islander Heritage month.

Jeanne Drewes is the chief of binding and collections care at the Library of Congress. She says the exhibition shows how similar paper and cloth can be, and how either material can fit the same purpose.

“Delicacy and strength is what I found in Korean paper … That comes out in this exhibit. This exhibit is so wonderful.”

Aimee Lee was born in New York. Her dedication to Hanji started when she traveled to Korea in 2008 with a U.S. Fulbright grant to research disappearing traditional paper arts. She studied at a paper factory in a rural village run by the same family for four generations.

The head of the family holds the special position of Korean National Intangible Cultural Property holder of Hanji making. The holders of these positions are considered masters of the arts.

On her return, Lee opened a studio to teach the making of Hanji at the Morgan Conservatory, a non-profit arts center in Cleveland, Ohio. Each fall, Lee says she collects material from the mulberry trees in its garden for use in the traditional paper making process.

“I gather … plant material from outside and then have to go through the process of … sorting the parts you need and then cooking it in special solutions, and then … beating it and then making paper. And then making the art from that.”

Lee has brought her Hanji paper making classes to art museums and universities across the U.S. More of her students, Lee says, are not ethnic Koreans. They want to learn more about the culture.

Lee’s artwork includes both traditional and more modern paper objects. Her love for the paper has also led to her writing a book called Hanji Unfurled: One Journey into Korean Papermaking.

And she says she plans to continue making Hanji for as long as she can.

“I still feel like there is so much I can do and learn. And so I continue to use it, and I don’t really see an end in sight.”