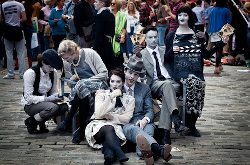 
Today we leave the mainstream -- the majority. We go to the edge of society -- to the lunatic fringe.

Merriam-Webster’s online dictionary defines lunatic fringe as “members of a political or social group or movement who have the most extreme or foolish ideas.”

It is the radical part of a group or political party. Two other words that describe people who are part of the lunatic fringe are fanatics and zealots. But now, let’s look at the word “lunatic.”

Lunatics are mentally unstable people or people who behave very foolishly. The root of lunatic is “luna,” Latin for “moon.” The Old French “lunatique” means “insane.” The Online Etymology Dictionary explains that in the late 13th century, people who were mentally unstable were thought to be affected by changes of the moon.

Now, the word “fringe” has several meanings. For example, fringe can be a decorative border. Curtains, pillows, tablecloths and clothing are all things that can have fringe. This meaning goes back hundreds of years.

Fringe can also mean to be on the outer edge of something. For example, the family lived on the fringe of a national park. This is an actual area where their property meets the park.

But you can also be on the fringe of something that you can’t physically touch. For example, my friend who lives in Los Angeles has worked on the fringe of the entertainment industry for many years.

As a result, you can see some strange and different theater performances at a fringe festival. They are definitely not mainstream.

The term comes from Scotland's Edinburgh Festival Fringe. According to the festival’s website, it dates back to 1947.

That is the meaning of fringe that is part of today’s expression -- lunatic fringe.

The Online Etymology Dictionary says that, in the late 1800s, “lunatic fringe” described a type of hairstyle for young women. Women with this hairstyle wore their hair straight across their forehead.

These days, in American English, we call the hair that falls over the forehead “bangs.” There are several examples of writers in the late 1800s using the phrase “lunatic fringe” to mean a hairstyle.

In 1913, shortly after a failed attempt to become president again, Roosevelt wrote about an art exhibit of painters. These artists painted in ways no one had seen before. At the time, they were the "lunatic fringe" of the art world.

This paragraph is from Roosevelt’s writing titled, “History as Literature.”

“… we have to face the fact that there is apt to be a lunatic fringe among the votaries [loyal followers] of any forward movement. In this recent art exhibition the lunatic fringe was fully in evidence, especially in the rooms devoted to the Cubists and the Futurists, or Near-Impressionists.”

We cannot guarantee that Theodore Roosevelt was the first to borrow this expression from a women’s hair salon and use it in another type of salon -- one where important conversations of the day take place.

But he does get the credit for making lunatic fringe more mainstream.