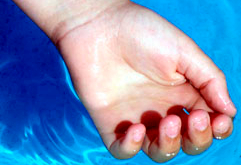 Medical experts say the most effective way to prevent the spread of disease is for people to wash their hands with soap and water.

The World Bank, the United Nations, and the London School of Hygiene and Tropical Medicine carried out a study to urge hand-washing around the world. They say that programs to increase hand-washing with soap could be among the most effective ways to reduce infectious disease. They say that one-million lives could be saved each year if people washed their hands with soap often.

Doctors say many diseases can be prevented from spreading by hand-washing. These include pinworms, influenza, the common cold, hepatitis A, meningitis and infectious diarrhea.

Hand-washing destroys germs from other people, animals or objects a person has touched. When people get bacteria on their hands, they can infect themselves by touching their eyes, nose or mouth. Then these people can infect other people.

The experts say the easiest way to catch a cold is to touch your nose or eyes after someone nearby has sneezed or coughed. Another way to become sick is to eat food prepared by someone whose hands were not clean.

The experts say the most effective way to wash your hands is to rub them together after using soap and warm water. They say you do not have to use special anti-bacterial soap. Be sure to rub all areas of the hands for about ten to fifteen seconds. The soap and the rubbing action remove germs. Rinse the hands with water and dry them.