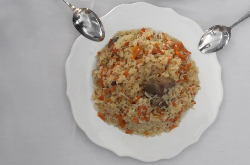 She recently ate at Dolan Uyghur Restaurant in Washington, D.C., with a group of friends and coworkers. There, they had what Clegg described as a “delightful spread” of common Uyghur food dishes: hand-pulled noodles, kebabs, nan, steamed rice with meat, and more.

Before her visit to the restaurant, she knew little about Uyghur food, she said.

“I had heard of Uyghurs, yes, but it was always in an academic context, or a political context, never in terms of the culture or the cuisine -- the stuff that makes up the core of the people. And I think that food is a great way to learn culture.”

Clegg says it is “rare” that she tastes something completely new, or different from anything she has tried before.

Eating Uyghur food, however, was one of those rare experiences, she said. “You feel echoes of other cuisines, but it all comes together in something new.”

Uyghurs are an ethnic group in Central Asia. About 10 million of them live in the Xinjiang Uyghur Autonomous Region of China, a huge area in the northwestern part of the country.

They speak Uyghur, a Turkic language that is similar to Uzbek, and use an Arabic-based alphabet. Most practice Islam.

Xinjiang sits between China and Central Asia. It borders eight countries, including Russia, Pakistan, and Afghanistan. It was an important area along the ancient Silk Road trading path.

Uyghur language and culture reflect Xinjiang’s history at the crossroads. So does Uyghur food.

Just five years ago, New York City was about the only place in America to find Uyghur food.

But more recently, restaurants serving Uyghur food have opened all across the country.

In Washington, D.C, two Uyghur restaurants have opened in the past 18 months. The growing presence of Uyghur food in the area led the Washington Post newspaper to ask, will Uyghur cuisine be the “next big thing” in the United States?

Uyghurs in the American restaurant industry hope that the answer is yes. Bakir Osman is one of them. He is the manager of Dolan Uyghur Restaurant. It opened last November.

“We’re more present than ever. I believe we’re going to be more present moving forward. And yes, I’m sure that it’s just a matter of time before a lot more Uyghur restaurants start spreading or opening all over the place.”

Uyghur cuisine combines the rich and hearty ingredients common across Central Asia with complex and spicy tastes favored in China. Bakir calls it a “combination of everything.”

"It’s a combination of everything: Middle Eastern, Turkish, Central Asian, Chinese, you name it.”

Most Uyghur food dishes include mutton or lamb. Uyghurs are known across China for their lamb kawap -- or kebabs. The meat is cooked on a grill and covered with cumin and other spices.

Another traditional Uyghur food is laghman -- fresh hand-pulled noodles, served with lamb, vegetables and a spicy sauce. The name of this dish is related to the Chinese l? mian -- or stretched noodles.

But no dish is more central to Uyghur food and culture than polo. Bakir calls it the “life blood of man.”

Polo is a rice pilaf -- a dish made of seasoned rice and meat and vegetables. Many Central Asian countries have their own version of pilaf. Uzbeks call it plov; Afghans call it palau.

The main ingredients in Uyghur polo are rice, carrots, onions, lamb and oil. Other ingredients are salt, sugar, cumin and water.

Ekber Kayser owns Dolan with his wife. He is also its head chef. On most days, Ebker prepares the polo at the restaurant. That means he must expertly cut huge amounts of carrots, onions and meat at the start of each day, Bakir explains.

Polo is cooked in a large, round pot. After the ingredients are prepared, Ekber heats the pot on the stove.

Once the pot is hot, he adds in a large amount of cooking oil. Then, he adds the onions and meat, followed by the carrots.

The chef then waits a few minutes before adding salt, sugar and then the water to the pot. This is when, in Bakir’s words, “it gets tricky.”

After the mixture comes to a boil, Ekber tastes the mixture over and over. He then adds a little salt, and then sugar. Then, he tastes it again and again, until the flavor is just right.

Uyghurs do not use exact measurements in their cooking. To prepare polo, the cook must taste dish every few minutes to make sure the flavor is correct.

“When he or she feels right about it, then that’s where it’s right. So, it has to be tasted and confirmed by the person who cooks it. There’s no way to measure.”

Bakir says polo should be “strong” in flavor. Once the taste is just right, Ekber adds the uncooked rice and spreads it around. Then, he covers the pot. The mixture steams for five or 10 minutes.

After this, Ekber removes the lid from the pot and mixes the rice around to make sure all of the flavors of the ingredients are spread evenly.

Then, he uses a chopstick to make holes in the mixture. This releases air and helps make the dish more flavorful.

After mixing the rice and making the holes, Ekber lets the rice mixture continue to steam for another 30 minutes. Then, the polo is served.

It is often topped with cumin and a generous amount of meat. Some Uyghurs eat polo with a side of yogurt and a small salad made of cucumbers, onions and other cold vegetables.

In Xinjiang, there are many different kinds of polo. Some Uyghur cooks add raisins or apricots to polo. Xinjiang grows a lot of both fruits. Others may add chickpeas, walnuts, or even hard-boiled eggs.

Bakir says he can eat polo in whatever way, at any time of day.

“Well, honestly speaking, I would eat polo all day long. And I will never get bored from eating polo. Back home I used to eat polo early in the morning, like 6 or 7 o'clock. So it's not really a dish that you eat at a certain time, for lunch or dinner, so to speak. But you can eat it any time you like."

Along with being a popular food all day long, polo is commonly served at big gatherings, Bakir says.

“Polo is traditionally served at parties and weddings -- gatherings -- as a way of showing respect to your guests and to your friends or family. And it’s also a way of celebrating or enjoying the rich cultural elements, I mean in this case, Uyghur culture.”

In his native language, Bakir says that he hopes Uyghur food continues to spread across America.

"Uyghur food is strong in both taste and smell. It gives people nourishment and strength. Therefore, we hope the American people like Uyghur food. We hope Uyghur food becomes an important part of American culture. We will strive to make it happen.”