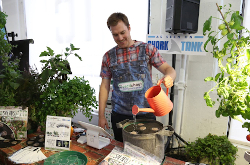 
How do you get the freshest, locally grown fruits and vegetables in a big city?

For an increasing number of Americans, the answer is to grow the fruits and vegetables themselves.

Businessman Cam MacKugler can help. He is the founder and chief executive officer of Seedsheet.

MacKugler was at the Food Loves Tech event in Brooklyn, New York, earlier this month. He was showing off Seedsheet products, which are for people who live in high-rise buildings or other homes with little space for growing plants.

Seedsheet products come with fabric sheets and small pods, each filled with a mix of seeds and soil. The fabric is placed on top of dirt in a home planter or in the ground. When watered, the pods soften and eventually break up as the plants start to grow.

The seed groupings on any given Seedsheet provide vegetables or herbs for salads and other meals. Pricing starts at $15 for the factory-made sheets. But you can spend up to $100 for a larger, made-to-order outdoor covering measuring 1.2 by 2.4 meters.

Efforts like Seedsheet come as Americans increasingly want to know where their food comes from. Many are looking for socially and environmentally responsible growing methods.

MacKugler told VOA that most of the company’s sales come from young people living in cities.

American consumers are not giving up on the low cost and ease of packaged and prepared foods. But new products and technologies are playing a part in helping Americans understand where their food comes from.

Baum said consumers were less familiar with the term “hydroponics” -- growing plants in water instead of soil -- when Gotham Greens first started in 2011. But more and more Americans have since heard about this form of agriculture.

Baum said she has also seen an increase in competing companies.

“We’re definitely seeing a lot more people within the space from when we first started, which is awesome,” she said. “I think it’s really great that other people are coming into the space and looking for ways to use technology to have more productive, efficient growth.”

Companies like Smallhold also advertised their services at the Food Loves Tech event. Smallhold manufactures mini-farms -- small, self-contained structures -- for growing mushrooms. The mushroom mini-farms are meant to be used in restaurants, not homes.

Smallhold sets up the devices and services them at restaurants, with restaurant workers harvesting mushrooms when they are ready. Hannah Shufro, operations lead at Smallhold, said the mini-farms help cut down on pollution that comes with transporting and shipping produce.

Shufro also noted that produce begins to lose its nutritional value right from the time it is harvested.

"When you’re harvesting food right out of a system that’s growing onsite, it does not get fresher than that,” she said.