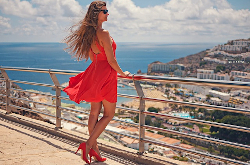 
Today we will talk about expressions with the word “heel.”

Now, heel has several meanings, many of which relate to the end or back of things. For example, we call the two ends of a loaf of bread the heels. This can be good to know, especially if you like dipping a bread heel into a simmering pot of tomato sauce or soup.

Just as the heel is the back of your foot, the heel of your shoe is also the back part. Many women like to wear high-heeled shoes. They may look nice but high-heels can cause pain and are not good for your feet. Sometimes we call the really high-heeled shoes that women wear "killer heels."

Speaking of shoes, wealthy people usually have many. To be well-heeled means to be wealthy and well-to-do. Perhaps wearing nice shoes is where “well-heeled” comes from.

Let’s move from shoes to pets! You may hear dog owners who are training their dogs say something like, “Heel, boy! Heel!” Here the verb “heel” means to follow or stop at a person’s heels.

Now, you would not leave your beloved pet with a heel. This is a person you cannot trust. “Heel” used in this way comes from an early 20th century American expression meaning an "incompetent or worthless criminal." Language experts say this definition may come from a "person in the lowest position" being compared to the heel of the foot.

Have you ever wanted to describe a situation where you were unwilling to change your mind about something? You could say you dug your heels in. Someone digging their heels in the ground would be difficult to move.

Stubborn is a good word to describe people who have dug their heels in. You could even use them together. For example, I stubbornly dug my heels in when my friend suggested we go to the mountains instead of the seashore. I really wanted to go to the beach!

If someone (or something) is at your heels, they are following closely behind you. Let’s say you have a little brother who really wants to hang around you all the time. He is always at your heels -- which could become annoying.

However, being on the heels of something is a little different. This expression means that something happens soon after something else. For example, Sonia and Timothy announced their plans to get married on the heels of another big announcement -- Sonia’s divorce from her last husband. Good timing, Sonia!

As a body part, our heels find themselves in two other common expressions.

To kick up your heels means to have fun. Some word experts think this expression may have come from the world of horses. Others say it comes from the way you might use your feet when you are waiting for something.

Regardless of its origin, Americans often use this expression after they have been very busy, as in this example: “After studying all month, the students were happy to finish their exams, kick up their heels and relax!”

If your friend really wants to go to a party, but you need to make a quick stop first, you could say, “Hey, cool your heels! The party will still be there!”

“To cool your heels” is also casual. If I were talking in a more serious and official situation, I might say that I waited patiently.

This expression dates back to the 16th century. After horses ran a long race, their feet were hot. So the animals stood in water to cool their feet. By the next century, people were using the saying cooling his heels to describe someone who was in a hurry but had to wait for something.