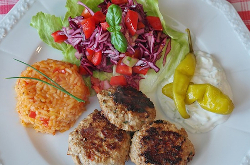 
You may not know it, but March 9 is a day to celebrate the meatball. That’s right. It’s International Meatball Day!

Nearly all of the world’s cultures have some kind of meatball. This delicious food combines meat -- pork, fish, beef, ostrich, chicken, you name it -- with spices, bread or rice, maybe egg and some kind of fat. The ingredients are mixed and formed into a ball and then cooked in many different ways.

People around the world also have different ways of serving and eating meatballs.

We add them to soup. We roast them on sticks. We bake them and then stuff them into bread. We deep-fry them in hot oil and eat them with gravy. We cook them in sauce and add them to pasta.

Most meatballs have some things in common. For one, they are easy to eat. They use easy-to-find ingredients. You can make a meatball out of just about any kind of meat. And they developed as a way to make the available meat feed as many people as possible.

In a story for the website Serious Eats, writer Chris E. Crowley describes 20 popular and tasty meatballs from around the world. He begins with the meatball that may have started it all: kofta.

While it is difficult to know for sure, many food historians agree this meatball originated in Persia. Crowley writes that Persians introduced kofta to Arab cultures. And they, in turn, brought kofta to Italians. Before long, the meatball had spread all over the world. Today, kofta appears all over the Middle East, in the Mediterranean and parts of South Asia.

Meatballs with all sorts of names can be found everywhere from northern Europe to New York City to Vietnam.

Swedish people are famous for their Swedish meatballs, called kottbullar. They are often served with gravy, along with boiled potatoes and a special lingonberry sauce.

One of Denmark’s most popular foods is a small, pan-fried meatball made of cut pork. Danes call it frikadellar. Crowley says these meatballs are found in many countries “where Danes have immigrated or colonized.”

Asian countries have many kinds of meatballs served in soups.

One type of meatball found in China is called Lion’s Head. It is a large, soft meatball made of finely cut pork. And they are often served with cabbage.

Vietnamese meatballs, called bo vien, can be made with beef, pork or chicken. They are especially chewy and springy. You might find them in a bowl of Vietnamese pho.

In the United States, Italian-American meatballs are generally bigger than those found in Italy. We usually make them with ground beef, pork, turkey, or a combination of meats. And we serve them with tomato sauce and pasta.

In fact, in the U.S., spaghetti and meatballs is one of the most popular food pairings. People of all ages enjoy a big bowl of this dish -- even children who are extremely picky eaters. And many restaurants have it on their menu.

Italians themselves have a much different kind of meatball. Their traditional polpette are small. The kind of meat used to make the polpette depends on which part of Italy you are in.

And while meatballs are easy to find in restaurants here in the States, many food websites claim that in Italy meatballs are more of a home-cooked food. Italians usually eat them as a main course in a simple soup -- and not on pasta.

Serving meatballs with pasta is a food custom started by Italian-American immigrants, like my grandfather.

My father’s father emigrated from Italy when he was 15 years old. Grandpa Giuseppe’s dirt floor basement had shelves filled with jars of homemade tomato sauce. Grandma Lina made the best meatballs that would cook for hours in Grandpa’s sauce, which he made from fresh tomatoes, peppers and basil from his garden.

So, I know if I were to find a restaurant in Italy that serves spaghetti and meatballs, it is probably only meant for American tourists. But that does not change the fact that it is a delicious dish that even the pickiest of children love, and a comfort food that reminds you of home.