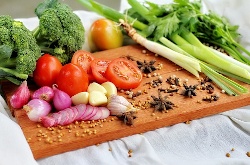 
We are what we eat. This is an old expression, but one worth knowing. A recent look at diets around the world shows that people who eat healthy food -- and not too much of it -- live longer.

But which areas of the world have the best diets? The Lancet Global Health medical journal has published findings on whose diets are the best. Researchers studied the dietary quality of people in 187 countries from 1990 to 2010. The Bill & Melinda Gates Foundation and Medical Research Council supported this study.

It found that foods found in some of the healthiest diets -- Mediterranean, New Nordic, French and Japanese -- may be very different, but they do have things in common. They are all heavy on local, seasonal foods and limit processed foods. They are high in vegetables and seafood and low in red meat.

Many studies have been done on the health benefits of the Mediterranean diet. This diet has lots of fruits, vegetables, whole grains, nuts and olive oil.

The diet has moderate amounts of fish and poultry. Red meat and foods high in sugar and salt are not big parts of this diet.

Olive oil is a common part of the Mediterranean diet. The New Nordic diet uses rapeseed oil instead. Very sugary desserts are not common in this diet.

And the New Nordic diet suggests cooking food at a lower temperature. Techniques such as baking and boiling help foods keep more of their nutritional value.

The World Health Organization says that Japanese people are some of the longest-living people on the planet. The life expectancy there is 87 years old for women and 80 for men.

Researchers believe the Japanese diet is the reason for such long lifespans. The diet has many foods that are low in calories and high in nutrients. Japanese people eat a lot of seaweed, tofu, miso soup, rice, vegetables and fish.

People on the island of Okinawa live especially long. And local food traditions may help explain why. For example, the tradition there is to stop eating when your stomach feels 80 percent full. The Okinawan diet is also especially heavy on nutrient-rich vegetables.

While food habits on Okinawa may be changing, the island is still home to many people over 100 years of age. Researchers suggest this may be from eating fewer calories over a long period of time.

However, French people eat fatty foods but do not get fat. And they live a long time. Researchers call this the “French Paradox.” A paradox is something made up of opposites and seems impossible but it is, in fact, possible.

The reason why French eat fatty foods without getting fat may be very simple. They simply eat less. Serving sizes in French restaurants and in products sold in stores are smaller than those in the United States. And generally speaking, most French people do not snack. This means they do not eat food between meals.

Americans are eating too many bad foods, and not enough nutritious foods. Some of the foods Americans love the most are the worst for them. These include sugary drinks, salty foods, and processed meats such as bacon and hot dogs.

And Americans are not eating enough healthy foods to increase their chances of living longer.

That is the message from researchers at Tufts University in the state of Massachusetts. Their 2017 study includes a nationwide look at people's eating habits. They found that about half of all U.S. deaths from heart disease, stroke and Type 2 diabetes are from a poor diet.

The lead author of this study is Renata Micha and the senior author is Dariush Mozaffarian. They published their findings in the Journal of the American Medical Association (JAMA).

The study found that most Americans do not eat the recommended amounts of "good" foods -- such as fruit and vegetables, seafood, whole grains, seeds and nuts. Nuts, for example, contain healthy fats that can help raise good cholesterol levels.

Noel Mueller is a health researcher at Johns Hopkins University in the state of Maryland. Mueller wrote about the Tufts study. He explains that a culture’s diet greatly influences the number of deaths caused by cardio-metabolic disease.

Eating certain “bad” foods such as processed meats and sugary drinks can also speed up cardiometabolic problems. Eating too much processed meat raises unhealthy cholesterol levels. Sugary drinks may lead to diabetes. And, Mueller explains, a high intake of sodium, or salt, can increase blood pressure.

In this case, “intake” is the amount of something that you eat or drink.

"The highest proportion of deaths was due to high sodium intake -- also, high sugar-sweetened beverage intake, high intake of processed meats, and low intake of nuts and seeds."

The Tufts study says public health policies targeting unhealthy eating may help prevent some deaths. But in the end, policy and public awareness campaigns only do so much. It is up to people to think about what they put into their bodies.

Health experts writing about these diet studies remind us of another thing that countries with the healthiest diets have in common -- people walk a lot. In addition to eating right and eating less, walking may help people live longer, and live healthier.