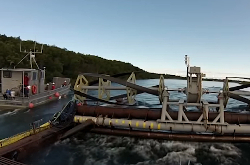 
A number of companies have used the wind and sun to produce energy. Now, one company is using the force of flowing rivers and ocean currents.

The company is based in the U.S. state of Maine. It is called the Ocean Renewable Power Company, or ORPC. The company recently presented the new technology at an energy conference near Washington, DC.

Christopher Sauer is the chief executive officer and co-creator of ORPC. He says the technology was designed for small, rural communities that do not have easy access to power sources.

The ORPC technology is an energy generator which can be put under water, called RivGen. It works in a series of steps. First, the generator is put in the middle of a steel cage. The cage goes on top of a wide boat with a flat bottom called a pontoon. Wheels -- or, turbines -- are attached to each side of the generator.

Once the pontoon boat is fixed to one place, it is flooded with water. The pontoon, cage, and generator all sink to the bottom of the river. There, the river current turns the wheels and creates as much as 50 kilowatts of power.

CEO Christopher Sauer says the generator is not very tall, so it can work in water areas that are not very deep. Other companies are not able to work in shallow water, he adds.

And, Sauer says, the turbines are safe for the animals that live in the river.

"At the peak of salmon season, we had almost two million fish pass by this thing but at the end of all of that, we did not have a single fish injury that we knew about,” he said.

Sauer notes that another feature of the technology are “crossflow turbines.” They permit the turbines to move in the same direction, no matter what way the water is flowing.

Sauer says the turbines’ shape permits the generator to harvest power from tidal currents in the ocean. The company’s ocean turbine is called TidGen. It can create up to 16 kilowatts of electricity, enough to power a small settlement.

Right now, the amount of power TidGen can harvest changes as the strength of the tide goes up and down. But ORPC workers are trying to make the power output steady. In time, they want TidGen power to be part of the main energy grid.

CEO Christopher Sauer estimates ORPC’s current price is about 50 cents per kilowatt-hour. That price does not make the ORPC system competitive with natural gas. However, for small rural communities, diesel energy can cost more than $1 per hour. In these situations, energy from flowing water could be more economical.