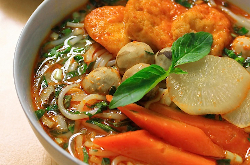 
Do you prefer ramen, pho or soba? If you live in India, chances are you are most interested in pho -- a Vietnamese soup with a light and flavorful liquid base, rice noodles, spices and meat, such as beef or chicken.

If you live in Spain, you are most likely to seek ramen -- a Japanese soup. It is rich and dark, with wheat noodles and toppings such as pork and seaweed.

Those are some of the findings from a recent Google Trends study. Along with comparing pho and ramen, the search engine company also looked at trends for soba -- thick Japanese noodles made from buckwheat. They can be eaten cold or served hot in a soup.

Google measured the percentages for all three search terms in 24 countries and 28 cities around the world.

It found that Google users in India show the strongest preference for pho over the other two kinds of dishes. Pho had 73 percent of searches. Ramen had 21 percent, and soba just six percent. Other areas with a high percentage of pho searches were: Canada, France, the United States and Australia.

The top five areas for ramen searches were Taiwan, the Philippines, Hong Kong, Spain and Mexico. Japan, the birthplace of ramen, is 11th on Google’s ramen list. Google users there search for soba noodles more than any other country. Other top soba-searching areas include Russia, South Korea, Brazil and the Netherlands.

Not surprisingly, it is the top pho city on the list, with 98 percent of searches being for pho. The next three on the list? Denver, Seattle and Houston -- all major American cities.

All of the top five ramen cities are in Japan. Number six through nine, though, are all U.S. cities: New York, Chicago, San Francisco and Los Angeles.

It is a pretty close race between pho and ramen here in the U.S. Pho got 50 percent of Google searches, while ramen had 46 percent.

Here in Washington, D.C. there are popular pho and ramen restaurants all over. And people often wait in long lines to eat their favorite bowl of either.

But, the winner in America’s capital? Pho. The Google report, which also examined all 50 states plus the capital, says 61 percent of D.C. searches were for pho; 35 percent for ramen; and four percent for soba.