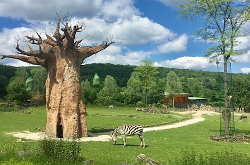 
Baobab trees are not only iconic images of dry, hot areas of Africa. Baobabs are important because they supply water and food for people and animals. They are sometimes called “the tree of life.” Yet, say researchers, some baobabs are mysteriously dying.

Nine of the 13 oldest trees, aged between 1,000 and 2,500 years, have died in the early part of this century. Researchers reported the finding in the scientific journal Nature Plants.

The sudden collapse is “an event of unprecedented magnitude,” the researchers wrote. They believe that never before have so many old trees died in such a short period. These baobabs were found in the southern African countries of Botswana, Namibia, South Africa, Zambia and Zimbabwe.

Researchers do not know for sure why the trees died. But they note that temperatures have risen and rainfall decreased in recent years.

Stephan Woodborne helped to prepare a report on the study. Woodborne is with South Africa’s National Research Foundation. He says the researchers do not think that baobabs across the continent are dying out. Instead, they believe the climate of southern Africa is changing.

Researchers have observed few young trees in the places where the old trees are dying. As a result, Woodborne says, baobab trees will probably stop growing in some places, and may start growing in others. He calls the move a reaction to “climate forcing.”

Historically, baobabs are often found in areas where elephants, rhinoceros and other wildlife live. Elephants help the trees spread when they eat baobab fruit. The seeds often grow in the nutritious elephant dung.

Baobabs take in large amounts of water during the rainy season and store it in their trunks and tree branches. The water gives the trees their wide shape. Large trees can store as much as 140,000 liters. Thirsty elephants tear off the trees’ bark and wood to get to the water inside.

Baobabs are also important to people. Researcher Stephan Woodborne notes that communities have been using the trees for a long time. His group has found many archaeological remains underneath ancient trees from societies that lived hundreds of years ago.

Even today, people gather around the trees for religious events and to communicate with family and friends who have died. People also use the baobab fruit to make drinks and mix with milk to create a kind of yogurt. In addition, the trees offer protection from the sun on hot summer days.

Anna Munzhelele lives near the Limpopo River in South Africa. She said eating baobab fruit makes people strong. “It’s like a type of medicine, we get energy from it,” she said.