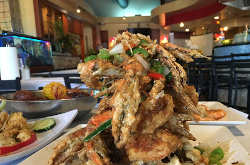 
Cajun culture is celebrated in areas along America’s Gulf Coast, the southern coastline that borders the Gulf of Mexico.

Most of the Cajun population lives in the state of Louisiana. The Cajuns’ ancestors were French-speaking colonists who came to the southern United States from an area that is now part of Canada.

The Cajuns brought with them different parts of their culture, including music, dance and food.

Cajun food is known for its many different spices, combined with mixtures of seafood, meat and rice.

One of the most common ingredients is crawfish -- a small, freshwater animal mostly found in rivers or small bodies of water. Crawfish can be cooked alone, or put in a traditional Cajun soup called gumbo.

Now, a different kind of Cajun food is gaining popularity: Viet-Cajun. This style of cooking was created by the area’s Vietnamese immigrants.

One restaurant specializing in this kind of food is Crawfish & Noodles in Houston, Texas.

Trong Nguyen is the restaurant’s owner and head cook. He explains what makes his Cajun boiled crawfish special: “We sprinkle that with Viet-Cajun seasoning right now…”

The mixture combines traditional Vietnamese flavors with common Cajun spices and ingredients. He says he thinks he developed a good sense of flavors from his grandmother.

“Back in Vietnam, my grandmom was a very great cook. So I have the taste (from) many years growing up with her. So I kind of had that taste in me while I work along, help her along, to prep the dish.”

Nguyen was 17 when he settled in Houston in the late 1980s as a Vietnamese refugee seeking political asylum. In the United States, he studied and worked several kinds of jobs. But in 2008 he decided to open his own restaurant to specialize in Vietnamese-Cajun food.

He says many other immigrants along the Gulf Coast also turned to the seafood industry. They created new Viet-Cajun dishes using crawfish, shrimp, and even alligator.

While Vietnamese and Cajun cultures might seem different, they do share some elements from French influences. The Cajuns were French colonists and Vietnam is a former French colony.

Nguyen also uses a lot of French ingredients in his food and says other Vietnamese cooks also understand this connection.

But Nguyen still uses a lot of traditional spices from his homeland. “My version is, I use a lot of Vietnamese seasoning -- mix it in some of the Cajun part to make it. Because Vietnamese like seasoning.”

Mike Vandenbold says he was born and raised on Cajun food in Louisiana. Now, he eats at Crawfish & Noodles once a week.

“When we came here, the extra Viet-Cajun spice is what made it for us. And we like these better than the traditional Cajun crawfish.

Terri Tran, a Vietnamese-American, is also a big fan of this special mix of food. “It’s very flavorful. There’s lots of seasoning on it, and the crawfish is cooked perfectly.”

Nguyen says he hopes the next generation of cooks will keep working to create even better versions of Viet-Cajun food to unite the two cultures even more.