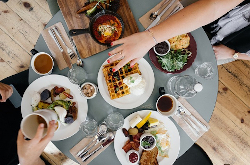 It is back to school time in much of the world. Calm, easy mornings are replaced with busy, hurried ones. Children wake up early and get ready for school. Many parents are also getting ready for work, helping their children and preparing food for lunches.

But, don’t forget about breakfast! When things get wildly busy in the morning, some people skip breakfast to save time. But that may be a big mistake for students.

Whether at home, on the way to school or at school -- eating something healthy for breakfast may help a student get better grades.

That is the finding of a 2015 study from Cardiff University in Wales. Researchers there looked at 5000 9-11 year-olds from more than 100 primary schools in the U.K. They looked at what the students ate for breakfast and then their grades six to 18 months later.

In 2013, an organization in the United States, also looked at possible connections between breakfast and student success in school.

The Share Our Strength's campaign, No Kid Hungry, found that on average students who ate breakfast provided by their school attended 1.5 more days of school per year. These students also scored 17.5 percent higher on standardized math tests.

But, are there really that many children who do not eat breakfast? The answer is yes.

Experts at HealthyChildren.org say that in the United States about 8 to 12 percent of all students in grade school (Kindergarten through 8th grade) do not eat breakfast. By the time students are in high school (grades 9 ? 12), 20 to 30 percent of them ignore the morning meal.

In Canada, researchers at the University of Waterloo looked at the eating habits of 42,000 students during the 2014-15 school year. The students represented 87 grade schools in Alberta and Ontario. The study found that “39 percent of students reported eating breakfast fewer than three days in a usual school week.”

What is a healthy breakfast? Health experts suggest that the best breakfast is a mix of complex carbohydrates, protein and fat. This gives your body the energy it needs to think clearly and to remember what it learns.

This was the 2005 finding of researchers at Tufts University in the U.S. They found that when it comes to giving the brain what it needs to work at its highest level -- not all breakfasts are created equal.

In their report, they explain that the brain needs glucose to work well. The best breakfast should include complex carbohydrates that slowly release energy to the body. Whole rolled oats, whole grain bread or low-sugar granola are examples.

But the report explains, simply eating a breakfast rich in carbohydrates may make a student tired.

So, adding protein helps to prevent that. Having a protein such as milk, yogurt, eggs or meat can help students to feel full longer. Oatmeal, the researchers say, is an example of a breakfast that is rich in fiber and protein. It releases energy slowly because it is a whole grain food. So, students will feel full longer.

Health experts on the website LiveStrong also suggest not eating too much for breakfast. This can also make a person feel tired and unable to think clearly. They say eating between 350 and 500 calories in the morning is a good amount of energy to start the day.

A good breakfast is not just helpful for school-aged children. We all may gain from eating something healthy first thing in the morning.