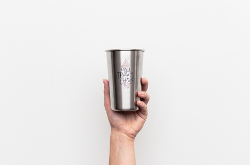 Environmental experts warn that our planet is drowning in plastic.

The world’s cities produce 2 billion tons of trash every year. By the year 2050, that number is expected to rise to 3 billion tons.

The World Bank estimates that the largest amount of trash today, about 44 percent, is plastic. This information comes from a 2018 World Bank report called Trends in Solid Waste Management.

But we often have to buy packaged goods. And often that packaging is made of plastic.
Now, that may be changing.

A new environmentally-friendly shopping model was recently launched at the World Economic Forum in Davos, Switzerland. This shopping model, called Loop, aims to replace throwaway containers with reusable ones.

This is part of what some people call the zero-waste movement. The main belief driving this movement is that much of the trash we create is unnecessary.

Loop is the idea of TerraCycle, an American-based recycling company. Its chief, Tom Szaky, told the Associated Press (AP) that “removing plastics from the ocean is not enough.” He said the point is to get away from disposability and single-use packages.

Szaky said that Loop is the future of shopping. But it comes from an idea of the past.

He likened it to the “milkman model” of the 1950s in the United States. Back then, someone brought milk to your doorstep in glass bottles and then left with empty bottles. These could be cleaned and used again. The result is zero-waste.

Loop will work the same way. Instead of throwing away or recycling a container, the product comes in a reusable one. When the product is all gone, someone will collect and clean the old container, fill it up and then return it to you.

At the start, Loop will offer about 300 products. Many of these include products that Americans use every day. And they come from some of the biggest names in business -- Procter & Gamble, PepsiCo, Nestle and Coca-Cola, just to name a few.

Proctor & Gamble makes many personal and health care products, such as soap, deodorants and diapers for babies. The company’s vice president and chief sustainability officer is Virginie Helias. She told the AP that the goal of Proctor & Gamble is to use all reusable or recyclable packaging by 2030.

Helias said that selling products on Loop is risky because no one else has tried it. She explained that Proctor & Gamble will start by selling 10 products on Loop as a test. If the results are good, more products will be added later.

Representatives from the environmental non-profit organization Greenpeace also joined in the discussion about Loop at Davos.

Jennifer Morgan is the group’s international executive director. She said that “Greenpeace welcomes the aim of the Loop Alliance to move away from throwaway culture and disposability.”

But Morgan questioned whether companies worldwide are ready to change their business models. Or, she wondered, is this an attempt for them to get good publicity.

Loop is set to launch later this year in three eastern U.S. states, and also in Paris, France and some of the surrounding area. Then Loop plans to expand to the U.S. West Coast, Toronto, Canada and Britain by the end of this year.