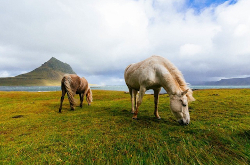 
Wild horses running across open land -- is a classic image of the old American west. But, many people might be surprised to learn that wild horses still populate the area. In fact, they do so in numbers that harm the environment.

The U.S. government is trying to find more private pastures for an overpopulation of wild horses. This search takes place through May 3.

The government program pays land owners to keep the horses on their pastures. However, the program has many requirements.

Debbie Collins is with the U.S. Bureau of Land Management’s Wild Horse and Burro Program in Norman, Oklahoma. She said, “It’s not like you can do this in your backyard, or even a 2 hectare plot.”

The pastured horses are left on their own with little human intervention. Still, they require a continuous water supply and basic shelter from the elements, like trees or canyons. Corrals for loading and unloading the animals from trailers are also necessary.

The private-pasture system is taking place in 14 western and midwestern states, from eastern Washington to northern Texas.

The horses are not pets. They have had little connection with people. Many are over 5 years old and would be difficult to train so the Bureau of Land Management, or BLM, will not sell them.

Still, there is lots of interest in the program. Collins said people call all the time seeking details.

“My only advice would be to go in with your eyes wide open,” said Dwayne Oldham, a former veterinarian in Wyoming. He started with the program in 2015. His family owns a large cattle ranch outside Lander, Wyoming. Oldham’s Wind River Wild Horse Sanctuary has more than 130 horses.

Oldham said working with the government can be demanding. But, he says, it is not difficult to provide for the wild horses.

Unlike most private wild-horse pastures, Wind River is open to the public.

About 80 kilometers to the south, cattle ranchers, wild horse supporters and the BLM have spent years involved in legal actions over the horses. The wild horse population in the area competes with cattle for food and water in the high desert, the ranchers claim.

But government lawyers say the BLM is following the 1971 Wild and Free-Roaming Horses and Burros Act. It protects wild horses and burros on BLM land in 10 western states.

“We want to be part of the solution and not just the adversary,” Oldham said.

But, the group does not oppose the program as an alternative to keeping wild horses in corrals for long periods.

The BLM says the area environment can safely support about 27,000 wild horses. But, the agency says there are now more than 80,000 horses out there.

About 36,500 wild horses are now living on private pastures under the government program. That is about as many as possible.

BLM’s Debbie Collins said, “It’s just a happier, healthier environment for a horse to be able to be out in a pasture.”