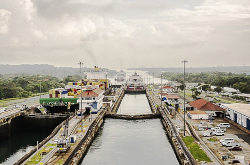 
This year’s El Nino weather pattern brought a drought to Panama. The lack of rain has lowered the level of the country’s Gatun Lake, a major part of the Panama Canal.

El Nino is a repeating weather pattern. During El Nino years, warm ocean temperatures in the Pacific lead to dry conditions in some areas, and wet conditions in others.

The Canal Authority’s move restricts how deeply ships can reach below the surface. That means large ships, mainly from the United States and China, must pass through with less cargo.

The canal charges shipping companies based on the size of the ship and how much cargo it carries. So, lighter ships mean less profit for everyone.

Carlos Vargas is the vice president of environment and water for the Canal Authority. He said recently that Gatun -- one of the largest artificial lakes in the world -- was 1.4 meters below normal levels for this time of year. It has dropped more than 0.2 meters since early April. A smaller lake that also supplies the waterway, Alajuela, was 2.2 meters below usual.

“Those low levels in the Panama Canal are the product of four or five months of almost zero precipitation,” Vargas told The Associated Press. “It really has been the driest dry season we’ve had in the history of the canal. The flow of rivers to the lake is down 60%.”

This is not the first time the Canal Authority has faced extreme weather patterns. A dry season in 2015-2016, also linked to El Nino, cost some $40 million in earnings.

And the drought is affecting more than shipping. Water supplies and profits from tourism are two other concerns.

Steve Paton is with the Smithsonian Tropical Research Institute. He says drinking water will likely not be a problem this year, but he does not know about the future. Weather events are becoming increasingly extreme, he notes.

Telvinia Tascon is an artist in San Antonio Wounaan on the Gatun River. Tascon said tourists usually visit every day to buy handmade goods, but lately the motorboats are having trouble moving in the channels. She says this is the strongest drought she can remember. “For me it’s sad,” she adds.

Relief could come by late May or mid-June, when rains from the wet season fill the lakes.