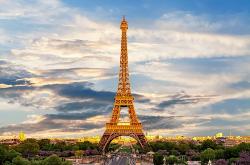 Paris is known as one of the most elegant cities in the world. Visitors talk about the magic of Montmartre, the Left Bank, the city’s beautiful, old buildings and tree-lined streets. But changes might be coming to Paris.

The mayor of Paris has plans to change the City of Lights. The changes include building the first city-center skyscraper since the 1970s and changing the grounds around the Eiffel Tower.

The plans have fueled criticisms, especially when it comes to the skyscraper project. It dates back to 2008, when a glass-and-steel pyramid-type structure was first proposed.

A Paris court rejected several legal cases brought against what is being called the Triangle Tower last month. The rulings gave Paris Mayor Anne Hidalgo an important win if the 180-metre tower is to be finished as planned for the 2024 Summer Olympic Games. The skyscraper project is expected to cost at least 500-million euros.

The design is to have reflective glass steps on two sides. It will be built a few kilometers south of the Tour Montparnasse, a 210-meter tall structure.

Montparnasse has divided and angered Parisians since it was completed in 1973.

“I don’t like it,” said Vincent Julien, 66, looking towards the building from the Luxembourg Gardens.

Asked about the new skyscraper, he was unsure, but not completely opposed to it. “I’m not against big buildings, big towers in Paris,” he said, “but you have to be careful.”

The other planned changes would affect the area around the 130-year-old Eiffel Tower. It stands at the head of the Champs de Mars, a public park and important gathering place since the French Revolution.

But the small numbers of restrooms and waste bins means it has also become popular for Paris’ rat population.

Last month, a London-based business won a competition to redesign the area, including a new point of entry to the Eiffel Tower from across the river Seine.

The plan, at an estimated cost of 72 million euros, involves turning the bridge across the river into a pedestrian-only space. It would also create a green area from the Trocadero on one side to the end of the Champs de Mars.

The project has worried some visitors. Their reaction is similar to what Parisians have expressed about rebuilding Notre-Dame Cathedral after the fire.

The city is home to about two million people, and has over 40 million visitors a year.

“Paris for me, it’s something historic,” said Nunz Paolano, 20, a visitor from the United States. “I want to come and see what was here, not what’s new.”

Others suggest that while Paris might be showing a willingness to try out new ideas, they don’t always work.

“Changing something that’s so old and has already functioned perfectly fine, not trying to fix what actually is here but start something new,” said Julia Wraith, a 20-year-old exchange student. “I feel like Parisians do that a lot.”