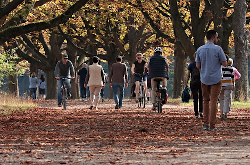 
Older women who walk a little over three kilometers each day might live longer than less active women of the same age, a new study suggests.

Many Americans hoping to stay healthy set a daily goal of 10,000 steps, or about eight kilometers. They often have this goal because they are wearing electronic devices which set that target, note researchers in the United States. Their findings appeared recently in the publication JAMA Internal Medicine.

But it is not clear how much intensity or speed matter when counting the health benefits of every step, the researchers write. They add that 10,000 steps per day might not be the right goal for everyone.

For the study, researchers observed 17,000 women, all in their early 70s. They asked the women to wear accelerometers for at least four days. Accelerometers are small devices that measure the number of steps and the intensity of movement.

The researchers followed up with the women much later, around 4.3 years later, on average. Since the beginning of the study, 504 women had died. Compared to women who took no more than 2,718 steps daily, the women who took at least 4,363 steps per day were 41 percent less likely to die.

“Even a modest amount of steps is associated with lower mortality,” said I-Min Lee, the lead writer of a report on the study. She is a doctor with Harvard Medical School and Brigham and Women’s Hospital in Boston, Massachusetts.

The women who took more steps had “lower mortality rates until about 7,500 steps per day, beyond which no further declines were observed,” Lee told the Reuters news agency. “The rate of stepping did not matter in these older women; it was the number of steps that mattered.”

This suggests that the number of steps, rather than intensity, may be more important for a long life among older women.

The study had a few limitations. For example, the researchers only measured women’s movements once, at the start of the study period. It is possible that the women’s behaviors changed over time.

Still, the results are “good news for older adults who may have difficulty walking at faster paces,” said Keith Diaz, a researcher at Columbia University Medical Center in New York City. He was not involved in the study.

“Any walking is better than nothing,” Diaz said by email. “With even small amounts of walking, your risk of death will be sharply reduced.”

“For those who have difficulty walking, other research shows that any form of aerobic activity provides health benefits,” he added.

“Swimming, bicycling, arm cranking or any form of activity that is continuous in nature will provide health benefits.”