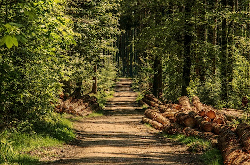 Today, we talk about the word “knock.” To help explain expressions using “knock,” you will hear scripted dialogues. We will also use songs. We really want to knock your socks off!

In other words, we want to have such an effect on you that your socks fly off your feet! So to speak.

Another expression with a similar meaning is “Knock ‘em dead!” Usually, we say this to close friends or family members when we want them to do a really great job at something. It is an easy-going, informal way to give someone motivation.

So, if a friend has a very important meeting, you can say to her, “Don’t worry. You will knock ‘em dead!” In other words, you are going to impress them so much that they will fall over dead! Not actually, of course.

The “e-m” in this expression is short for the word “them.” But when saying this expression, we don't say “them.” We say the informal, shortened form of the word -- pronounced ‘em. And we say it quickly blending the words together: Knock ‘em dead.

Now, as a verb, “knock” has many meanings. The most common is to simply knock on something, or hit it, with your fist. For example, you knock on a door when you want to enter someone’s house. That you probably know. But did you know that when you want good luck, you should knock on wood?

This custom may come from ancient times when people believed that gods existed in nature. So, for example, knocking on a tree was thought to bring good luck. Even if they don’t believe it to be true, many Americans say “Knock on wood!” to mean “Wish me good luck!”

Now, another way we use “knock” as a verb is to combine it with the word “around.”

To knock around is to walk around without a clear purpose. So, you can knock around your neighborhood, a ball field or city streets. One day on a visit to New York City, I knocked around Central Park for a good two hours! And it was not a waste of time. So, don’t knock me for spending so much time knocking around!

And this brings us to yet another meaning of the word “knock.”

It also means to criticize. If you knock something you find fault with it. So, if someone criticizes your career choice, you can say, “Why are you knocking my job? It’s my business what I do. Not yours.”

We use this meaning of “knock” in another informal expression: Don’t knock it 'till you’ve tried it. This means you should not criticize something you have not tried.

Another common expression is to simply tell someone to “knock it off!” This is a forceful and somewhat childish way to say “Stop it!”

There is another “knock” expression that we use only in special situations. So, let’s say somebody wants to do something and you really don’t care if they do it or if they don’t. In that case, you could say, “Knock yourself out.”

Let’s hear it used in these two short dialogues.
A: Wow, your sandwich looks good.
B: It is good. But I'm full.

A: Can I finish the rest?
B: Knock yourself out.

A: Hey, are you going to be home this weekend?
B: Yes. Why do you ask?

A: Well, I want to throw a party. Since you’re my roommate, I’d thought I’d check with you first.
B: I don’t care.

A: Are you sure? It might be loud.
B: Knock yourself out!

On the Formal/Informal Scale -- if we were to have one -- this term would rate as very informal. So, only use it with your good friends and not your employer, your friend’s grandparents or a university professor.

Speaking of university, some people go there to learn. While others learn from experience. And difficult experiences can be the best teacher. In a way, they are a lot like school. And we call that school the school of hard knocks.

Graduated from Hard Knocks
I got my education and hard knocks

In the school of hard knocks, you learn something as a result of difficult or unpleasant experiences. The term "hard knocks" means the situations in life that try to knock you down, but you won’t give up.