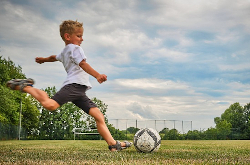 From birth to death, the word “kick” plays an important part in the human experience. In the very beginning, a happy mother-to-be feels the first signs of life “kicking” inside her.

And near the end of life, some people may use the idiom “to kick the bucket” when someone dies. Although I would be careful using it. “Kicked the bucket” is a very informal slang expression. And it is a bit, well, cold or unfeeling.

That’s right. But, in addition to those two sayings, American English has many other “kick” expressions.

For example, we kick with our feet. So it should come as no surprise that kicks is a term for shoes. We always use this slang expression in its plural form. Younger people, under the age of 30, use the term kicks more than older people. And they usually use it when talking about a pair of sports shoes … as we will hear in this dialogue.

Hey, I like your kicks! Are those the new Air Jordans?
They are. And I paid a pretty penny for them.
Well, you had better not waste all that money. Let’s go shoot some hoops!

Are you crazy? I don’t want to damage my brand new kicks!
But they are basketball shoes -- made for playing basketball.
But that’s not why I bought them. These kicks are for styling.

Now, people of any age kick up their heels when they want to have fun. If you kick up your heels you have forgotten all about your cares and are having a good time.

Kicking up your heels is fun. But getting kicked around is not. That is when people treat you badly. They do not hurt you physically. But they do not treat you with respect or kindness.

But pay attention when you hear this expression. “Kicking around” has other meanings.

It can describe someone who has moved around a lot. People who have kicked around for most of their lives have spent their lives moving from one place to another. If a man spent his 20s and early 30s kicking around from place to place, that means he moved a lot.

Besides kicking around from place to place, you can also kick around an idea. This means to have an idea and then think about it in many different ways. You want to know if the idea will work. At an office meeting, workers kicked around ideas on how to improve their delivery process.

So, you can kick around an idea. But you can also kick other things … like yourself! To kick yourself means you feel badly about something you did. Usually this mistake or bad choice made you miss an opportunity. And that is why you are angry and willing to kick yourself.

As you can see, “kick” is one of those English words that has many different meanings depending on the words used with it. For example, if you combine “kick” with the word “off,” it means to start something.

Yes, sometimes singers kick off a world tour with one special concert. Or a new store may kick off a grand opening with a great sale event.

You can also kick-start something, like your career. It means to get it going. This term comes from motorcycles. On a motorcycle you must kick down on a metal bar to start the engine.

That is where the fundraiser organization Kickstarter took its name. With Kickstarter, people give money to kick-start a cause or project.

But without the words “off” and “start,” the verb, “kick” means to stop doing something. When you kick something, you stop doing something harmful, like smoking. You can also kick the sugar habit or kick a gossiping habit. We usually say “kick the habit” together.

And now, let’s change the preposition from “off” to “out.” When you kick someone out of a place or group, you ask them to leave. For example, some students are kicked out of school for behaving badly over and over again.

That might be true. But, getting a kick out of something is a good thing. This means you really enjoyed it. For example, some people get a kick out of seeing their old friends from high school.

And I can say, I always get a kick out of watching fireworks. I really enjoy them! Some people get their kicks in other ways. Maybe they get their kicks playing a sport or driving fast cars.

Okay, that is a lot of kick expressions! It is such a useful word in the English language.

But now, let’s hear how to use them in this short dialogue between two friends.

Hey, why didn’t you go to Jason’s party last night?
Oh, I thought his party was next weekend.

No. It was last night. And it was a perfect way to kick off the weekend. I had such a long week. So, I really kicked up my heels!

I went to a campaign kick off for a political candidate.
You usually get a kick out of political events.

Not this one. No one showed up. I could just kick myself for missing Jason’s party.
Well, actually, you didn’t miss much.
What do you mean? He throws great parties.

Well, this year, he threw his party at a friend’s house … without telling them. I think it was around 8 pm when the homeowners returned and they kicked everyone out.

Oh boy, I guess Jason is the one kicking himself for that one.