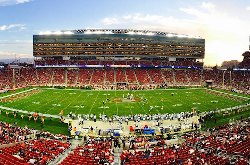 
The first thing Nima Vaez-Zadeh does before starting work during American football season is inspect his fantasy football team.

“During the season when players get hurt, you’ve got to change your lineup, add people from the waivers,” he says.

The 30-year-old, Washington-based businessman says he takes up to an hour each day to consider, and reconsider, his team’s players.

But fantasy team owners, like Vaez-Zadeh, play for the right to hold their league's top prize, a championship trophy, for a year.

The Fantasy Sports and Gaming Association estimates there are 59 million fantasy sports players in the United States and Canada. The group adds that the fantasy sports industry is worth more than $7 billion a year.

Like many Americans, Vaez-Zadeh has been playing fantasy football for years. And he does not just take part in one competition. This season, he is playing in four different fantasy leagues with high school friends, university friends, co-workers and family members.

Vaez-Zadeh says his childhood dream was to head a sports team. “This is the closest I'll ever get to it, so it kind of makes me feel like I could put together a super team on my own and monitor that.”

But is that fun costing U.S. businesses billions of dollars?

“We're anticipating that fantasy football is going to cost employers this year around $9 billion in lost wages,” notes Andrew Challenger. He says the money is being paid to unproductive office workers. They are participating in fantasy football activities when they normally would be working.

There is not a sure way to document employer losses. But Challenger estimates workers will spend 30 minutes daily during work hours studying their players, proposing trades and doing related research.

Challenger says that is not necessarily a bad thing, however. In fact, he thinks it would be a mistake for employers to restrict fantasy football in the workplace, where smartphones and social media already entertain workers.

“Fantasy football is one of those few areas that employers can insert themselves,” Challenger says. “They can start their own league, and it gets people within the office talking to each other, often people from different departments within your organization. We feel like that's a really good investment for companies in terms of the culture of their organizations…”

Challenger himself has seen these results. His company supports an official fantasy football league.

“We have a trophy that you get your name engraved on at the end of each season and get to keep that on your desk all year,” he says.

Vaez-Zadeh’s workplace does not operate an official fantasy football league, but he says members of the leadership team do take part in the office’s fantasy league.

Naturally, everyone wants to win. But for Vaez-Zadeh, keeping in contact and interacting with old friends is as important.