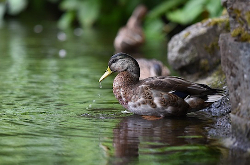 
Many animals live in and around bodies of water. Take ducks, for example. Ducks love the water. You can often see them floating happily on the surface of lakes, creeks, rivers and ponds.

Ducks swim effortlessly in all kinds of weather. Feathers protect them and other birds against the cold.

Ducks are great hunters. You can watch them diving down under the water for food, with their bottoms and webbed feet sticking up in the air. Ducks often live near water. This is where they mate and lay their eggs.

So, you could say that ducks really know water. In nature, they are water experts. This brings us to our first expression: to take to something like a duck to water.

This means you are really good at something without even trying very hard. It is not a struggle for you at all. It is almost as if you were born to do it. And you really enjoy it.

For example, the first time the boy got on a bicycle he rode surprisingly well. You could say he took to biking like a duck to water.

When my friend told me that she wanted to start rock climbing, I worried about her. Rock climbing can be a difficult and even dangerous sport. But she has taken to rock climbing like a duck to water! Now, she’s even competing in rock climbing competitions.

So that is our first duck and water idiom. The next one also describes something easy with "duck" and "water."

When something is like water off a duck’s back, it is no big deal. Whatever has happened has had no lasting effect on the duck or anyone else.

This expression comes from the fact that duck feathers are waterproof. They let water run off a duck’s body. The feathers are perfectly designed because the birds spend so much time in the water.

In English, we use this saying when talking about something that has happened to someone, but the person doesn’t seem to care. They are not bothered at all.

Now, the opposite of that expression is to ruffle someone’s feathers. This means that the person is really unhappy about something, just as ducks would be if you ruffled, or messed up, their waterproof feathers.

Take my friend Chuck, for example. You can say anything to him and he will not get upset. Nothing seems to ruffle his feathers. Everything just rolls off of his back.

A more formal way to say this is Chuck maintains his composure. If you lose your composure, you have let a situation upset you … or ruffle your feathers.

Now, let’s hear two friends use some of these duck, water and feather expressions.

So, I’ve been hanging out with Hope more these days and I really like her.
Yeah, I like Hope too! She’s very easy-going.

Exactly. Things that would upset most people, just don’t affect her at all. Most things are like water off a duck’s back.

And that’s such a great personality trait. I have a couple of friends whose feathers are easily ruffled. If the littlest thing goes wrong … they get very upset. Such a pain!

Oh, and another great thing about Hope, she’ll try anything! Last weekend we went golfing together even though she’d never been before. And we had so much fun!

Isn’t it difficult to golf with someone who's never golfed before?
Yeah, usually. But she took to the game like a duck to water. In fact, she made shots that took me months to learn!

Didn’t that ruffle your feathers -- you know, the fact that she was better than you?
Not at all! For me, anything that happens on the golf course is like water off a duck’s back. I just golf to spend time outdoors and get a little exercise.