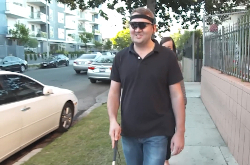 
A new device is helping those who are blind to see. It does this in a new way by helping them experience the world around them.

Jason Esterhuizen lost his eyesight after a car accident. He never thought he would be able to see light or movement again. But now with the movement of a switch, his world suddenly grew brighter.

He says, "I still can't put it into words. I mean from being able to see absolutely nothing, it's pitch black, to all of a sudden seeing little flickers of light move around.”

It is not full or normal sight, but Esterhuizen can move about in the world around him.

Dr. Nader Pouratian is one of the researchers at the University of California at Los Angeles Medical Center who worked on the new technology.

The new technology uses several parts. One is a small device placed in the brain. The other parts are a video camera on sunglasses and a processing device that can be carried in a person’s clothes.

When the user points the camera, a signal goes to the processor and then back to the glasses. The glasses then communicate wirelessly with the device in the brain. The information causes a pattern to develop in the part of the brain called the visual cortex.

The pattern helps users detect, or see, movement and shapes of light. And it all happens in seconds.

Pouratian says this technology is a first. “We basically have the video camera and the video processing unit functioning or performing the functions of what the eye normally does.”

Esterhuizen is one of just two people in the U.S. testing this technology. He describes what he sees. “There's little white dots on a black background. It's like looking up at the stars at night.”

The technology -- called Orion -- is manufactured by a company called Second Sight. It is being tested at the UCLA Medical Center in California and the Baylor College of Medicine in Texas.

Esterhuizen says the results are amazing. “Someone moving across the room, walking past me or walking away from me, or it's a light against the wall. It was just amazing to have some form of functional vision again.”

He adds that now he can do everyday activities around his home that he once could not. It is easier to walk outside.

"Crossing the road is much easier and much safer for me because I can look down and just follow the white line that's painted on the road.”

The researchers believe that one day this technology could help people who have lost their vision because of illnesses like glaucoma or diabetes. It may also help those with poor vision or who were born blind.