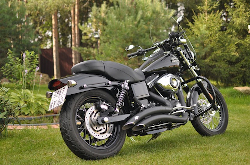 
Harley-Davidson has halted production of its new electric LiveWire motorcycle after finding a problem during quality control tests.

In a statement, the company said it “recently discovered a non-standard condition during a final quality check” of the first motorcycles. The Wall Street Journal says the problem relates to the vehicle’s power charging system.

Harvey-Davidson announced on Monday that it had begun “additional testing.” It said the tests were “progressing well,” but did not say when the LiveWire’s production might restart.

The company also announced it has halted shipments of the motorcycle to Harley dealerships. The Reuters news agency says the company had begun shipping the cycles to dealers in late September.

The fully electric LiveWire is seen as an attempt by Harley to appeal to a new generation of young, environment-friendly riders. But automotive experts say its cost -- nearly $30,000 -- is too high for many people.

They add there is little evidence the 116-year-old company’s new bike will be popular among young riders.

Harley-Davidson has long struggled to increase sales in the United States. The U.S. market makes up more than half of the company’s total motorcycles sold.

In 2018, Harley reported its sharpest sales drop at U.S. dealerships in four years. The company’s U.S. sales are expected to fall again this year. As a result, Harley Davidson stock prices have fallen 42 percent in value over the past five years.

LiveWire is much smaller than most of the company’s traditional street bikes. The company says the LiveWire can reach a speed of 96 kilometers an hour in just under three seconds. It can travel about 235 kilometers on a single power charge.

LiveWire has been available for preorder in the U.S. market since January. The Reuters news agency spoke with at least 40 dealerships that will sell the bikes. Representatives told Reuters that most of the LiveWire orders received so far came from existing Harley owners or older riders.

Some dealers told the news agency they had received a lot of requests for information about LiveWire from young people. But the bike’s cost is making it difficult to turn that interest into sales.

“Interest is very high,” one sales manager at a New Jersey-based dealership told Reuters. “But once you get to pricing, interest is thrown out of the window.”

One of Harley’s competitors is Zero Motorcycles, a California-based company. It is already selling electric bikes in the United States, with prices starting from $8,500. Its top-end bike -- the Zero SR/F -- is comparable to LiveWire, but costs nearly $9,000 less.

Bob Clark is a dealer for Zero Motorcycles in Chicago. He told Reuters that most younger buyers he deals with are deciding to go with the lower cost bikes. Clark said he has not yet sold any SR/F models to riders under the age of 35. All three electric bikes he sold to young riders this year were in the $10,000 price range.