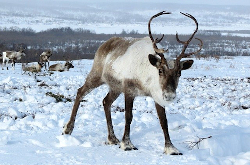 Members of a native community in the arctic areas of Sweden say their reindeer are facing possible starvation from unusual weather related to climate change.

The Sami indigenous community takes care of about 8,000 reindeer throughout the year. The animals are moved between traditional feeding areas in high mountains bordering Norway in the summer and forests farther east in the winter.

Community member Niila Inga told The Associated Press he is worried about his reindeer. He said climate change has affected the area’s weather activity and created food shortages. “If we don’t find better areas for them where they can graze and find food, then the reindeers will starve to death,” Inga said.

He demonstrated the problem by reaching down into the snow and pulling up a hard piece of ice close to the soil.

The area received unusual snowfall early in the fall, followed by rain that froze. Inga said this traps the plants that reindeer eat under a thick cover of ice. Some of the hungry reindeer have now moved away from their traditional migration areas in search of food.

Community members say half the reindeer moved towards the east as planned. But the rest headed back to the mountains, where they face the risk of attacks by other animals or being caught in an avalanche.

Older members of the Sami community say that in the past, they only remember bad winters about once every ten years. But now, Inga says “extreme and strange weather are getting more and more normal,” happening several times a year.

Studies have shown that the arctic is warming twice as fast as the rest of the Earth. Measurements by Sweden’s Meteorological and Hydrological Institute show the country has warmed 1.64 degrees Celsius compared with pre-industrial times.

In Sweden’s mountain areas, the increase is even greater. Average winter temperatures between 1991 and 2017 rose more than 3 degrees Celsius compared with the 1961-1990 average.

Snowfall is normal for the area. But as temperatures increase, rain can also fall, creating a “rain-on-snow” effect. When this happens, food remains trapped underneath the ice where the reindeer cannot reach it. This causes the animals to grow weaker and struggle to make it through the winter.

Weather changes have hit the Sami community hard. “We have winter here for eight months a year and when it starts in October with bad grazing conditions it won’t get any better,” Inga said.

Sanna Vannar is a 24-year-old Sami community member living in a mountain town just north of the Arctic Circle. “Everyone wants to take the reindeers’ area where they find food,” she told AP.

“But with climate change, we need more flexibility to move around. Here you can’t find food, but maybe you can find food there. But there they want to clear-cut the forest and that’s the problem.”

Vannar is president of the Swedish Sami Youth organization. The group launched a legal action in 2018 to force the European Union (EU) to set better targets for reducing human-caused greenhouse gases.

“We’ve said we don’t want money because we can’t buy better weather with money,” Vannar said. “We’ve said we need the EU to take action and they need to do it now.”