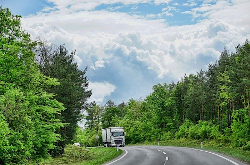 
People in Switzerland may see some very large, hydrogen-powered trucks on the road this month. The trucks are products of the South Korean company Hyundai. They are part of its plan to establish the company’s technology in a low carbon world.

Hydrogen is hard to store. And the process by which it is taken from natural gas also produces carbon emissions.

With more than half of Switzerland’s energy coming from hydropower, the country could take “green” hydrogen from water. This process is called electrolysis. It may require more energy, but it is carbon-free if powered by renewable electricity.

Mark Freymueller is the head of Hyundai Hydrogen Mobility. He says that developing a hydrogen-powered truck is no easy job.

“It is not enough to produce a truck. You have to take care of the entire ecosystem, find like-minded partners and show this all makes sense for the customer,” he said.

Switzerland’s “green” hydrogen is far more costly than diesel fuel. But Hyundai hopes that as governments restrict carbon emissions -- and the cost of producing the clean fuel drops -- the numbers could start to add up.

McKinsey & Company, an advisory service, noted in a study that the cost of hydrogen made with renewable energy could be cut in half over the next 10 years.

That cost would be almost equal to the cost of diesel for heavy vehicles, once other costs are added in.

Hydrogen has long been thought to be an alternative to oil and other fossil fuels.

Hyundai’s H2 Xcient trucks have a 190 kilowatt fuel cell and seven high-pressure tanks. Each tank can carry nearly 35 kilograms of hydrogen. The truck can travel distances up to 400 kilometers -- much further than current heavy goods vehicles powered by electric batteries.

For now, Hyundai is depending on government assistance for fuel cell trucks. “We are not fooling ourselves, it is initially a subsidized business model,” said Mark Freymueller.

Around the world, the South Korean company is betting heavily on hydrogen. It plans to spend $6.7 billion on hydrogen technology by 2030.

Hyundai Hydrogen Mobility is starting out with 50 H2 Xcient trucks but plans to put 1,600 on Swiss roads by 2025. The company is also looking to launch similar projects in at least two more European countries this year.