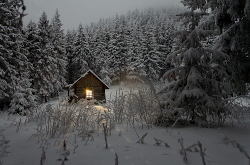 
Today, we are going to talk about being trapped indoors for a long period of time.

Sometimes we are stuck indoors with others and are unable to go out to usual places, such as restaurants, movie theaters and sporting events. Sometimes these restrictions are forced upon us. We have little choice in the matter.

People in this situation may develop “cabin fever.”

Cabin fever is a condition. It happens when someone is stuck inside for a long period of time. If someone is unable to get outside into fresh air or be around other human beings, they may start to feel closed in, stuck, trapped.

When people are forced to stay in a remote or confined place, they may feel unhappy, restless and bored.

We have many other adjectives to describe cabin fever. Because our patience is tested, we may feel irritable and short-tempered. The smallest thing sets us off or in other words -- makes us angry. Every little thing gets on our nerves.

Word historians say “cabin fever” probably came into use in the late 1800s in North America. Early settlers lived in log cabins. They would spend long winters by themselves on the Great Plains. Cold, windy weather and great distances from other people created a truly isolating existence for months at a time.

Documents at the United States Library of Congress suggest another origin for the term “cabin fever.” This one involves the disease typhus.

In August of 1906, a woman named Mary Mallon began work as a cook in a wealthy home in New York state. By September, several people in that household got the disease typhus. Health officials traced the cause back to the cook, Mary.

The LOC documents say that on March 19, 1907, she was “forcibly removed from her home by the health department.” “Typhoid Mary,” as she was called in the press, was first sent to the hospital then to an isolated cabin.

Mary Mallon fought for her release. She had private tests done to prove she did not have typhoid. Her story was often reported in many newspapers and she gained sympathy in the press.

On July 10, 1909, the Richmond Planet ran the story, “Typhus Mary Wants Liberty.” In it Mallon says she was forced to live in a house by herself with only a dog for companionship.

She had been in forced quarantine for about two years. Then in February 1910, Typhoid Mary was released on one condition -- that she never work as a cook again. However, she broke that condition, this time under a different name -- Mary Brown.

In 1915, typhoid broke out again -- this time at a hospital. It turned out that Mary Mallon was again at the center of it. And again, officials took her away.

Typhoid Mary spent the last 23 years of her life in forced isolation. And this time, no one felt bad or sided with her. The press continued to call her “Typhoid Mary,” a name that has stuck.

The case of Typhoid Mary is a serious example of forced isolation. And most likely, she suffered from “cabin fever.”

These days, however, we usually use the term in a more light-hearted way. We might say, “I have a serious case of cabin fever. I need to get out of my house!”