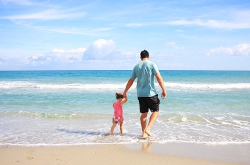 
Every year, the United States celebrates Father’s Day on the third Sunday in June. Other countries such as Britain, Canada, India, Ireland, Mexico also celebrate fathers on this Sunday in June.

But some countries choose to celebrate fathers at other times of the year. In Australia, Father’s Day is celebrated on the first Sunday in September. In Norway, Sweden, and Finland, the holiday falls on the second Sunday in November.

In countries with a strong Roman Catholic tradition -- for example, Italy, Spain, and Portugal -- Father’s Day falls on March 19. That is the main feast day of a religious holiday honoring Saint Joseph. He was the husband of Mary, the mother of Jesus Christ.

And China celebrates Father's Day on August 8 -- the eighth day in the eighth month of the year. Why on that day, you may ask? The word in Chinese for “eight” is ba and two of them -- ba ba -- is a term for “father” in Chinese.

Regardless of when or even if your country holds Father’s Day, today we will celebrate fathers around the world with a father-related expression:

Success has many fathers, but failure is an orphan.

The phrase has this meaning: People are often quick to connect themselves to successful events and distance themselves from failed ones.

So you can use this expression when talking about people wanting to be close to success or far away from failure.

Here is an example. Let's say you are working hard on a risky business project. There is a good chance that it could fail. For that reason, other people do not want to help you.

They keep their distance. So, you are forced to work by yourself. Finally, you complete the project, and over time, it becomes a huge success.

So, you decide to throw a celebration party. Now, some of the people who thought it would fail come to your party. They want to be close to you and your successful project. They may say things like, “I knew you could do it.” or “I had a feeling this was a great idea!”

You can say to them, “Yes, success has many fathers...” You don’t even have to say the whole phrase. They should understand the insult.

Several websites claim that the man who first used this phrase was an Italian diplomat named Count Caleazzo Ciano. He was married to the daughter of Benito Mussolini, Italy’s leader during World War II.

In 1961, U.S. President John F. Kennedy popularized this saying. Kennedy used the expression in a speech when he announced the failure of the U.S.-supported Bay of Pigs invasion of Cuba.

Perhaps some people wanted to distance themselves from the failed invasion. But Kennedy, as Commander in Chief, could not. He changed a few words, but the meaning is still the same.

Here is part of his 1961 address to the American people.

“There's an old saying that victory has 100 fathers and defeat is an orphan. I've said as much as I feel can be usefully said by me in regard to the events of the past few days."

That was former president John F. Kennedy expanding on the phrase, Success has many fathers, but failure is an orphan.