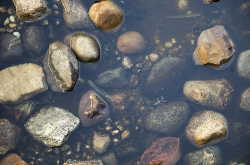 
On today’s program, we will talk about the expression: A rolling stone gathers no moss.

Most of you probably know that a stone is the same thing as a rock. But what about moss?

Well, moss is a very soft, green plant. It has very small leaves and does not flower. It loves shade and water. So, moss grows well on wet ground, trees and rocks. In fact, rocks and stones that line shady creeks and rivers are often mossy.

Moss grows slowly and is a rootless plant. It spreads well over non-moving surfaces. In fact, to prevent moss from growing on stones in your garden, you can just move the rocks around, turning them over now and then. Why? Because “A rolling stone gathers no moss.”

Now, years ago this expression was covered in another Words and Their Stories. That story explained the expression’s connection to rock-and-roll. Writer Shelley Gollust explained that "a rolling stone gathers no moss" can be understood in a couple of ways.

It can mean that a person who never settles down in one place will not gather wealth or long-lasting relationships. The moss that slowly spreads across the rock represents the money and friends we make over time.

How does it feel?
To be on your own,
With no direction home,
A complete unknown,
Like a rolling stone.

But there is another way we use this expression. Think about a rolling stone. It leads a carefree existence, on the move with no moss to worry about. People who are “rolling stones” live without the restrictions that come with responsibilities.

They go where they choose when they choose. And, they don’t stay anywhere long enough to form attachments. Or moss.

A free spirit is also a term we use to describe such a person. They are not tied down with lots of traditional responsibilities.

A rolling stone could also be described as “nomadic,” often moving. Experts at the Merriam-Webster online dictionary define a nomad as a “member of a group of people who move from place to place.” Often nomads move around to find food.

However, these days we can use the word “nomadic” to describe anyone who moves around a lot.

Now, the rolling stone lifestyle has been explored in many songs including work by Muddy Waters and Bob Dylan.

One of the best came from The Temptations in 1972. “Papa Was a Rolling Stone” is about a man who leaves his family. In the song the mother tries to explain the father her son never knew.

Papa was a rolling stone (my son, yeah)
Wherever he laid his hat was his home …