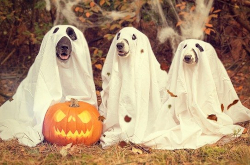 In the United States, October 31 is Halloween -- the night when magical, frightening creatures and ghosts, the spirits of those no longer with us, walk the land! Okay, not really. But it is fun to make believe.

To mark the day when children dress up frightfully to collect candy from their neighbors, our program today will be haunted by ghost -- expressions!

For example, did you know that the word “ghost” is also used as a verb? But it does not mean to haunt a place.

When you ghost an event, like a party, you leave without saying goodbye to anyone -- even the host! You just disappear into thin air … like a ghost! But unlike a ghost, you do reappear later, at work, for example, or your exercise class.

Some people even ghost a relationship. They simply leave the person without any explanation. That could haunt someone for a long time. It could leave them wondering, “What happened? What did I do?”

But dear listeners, I would never ghost on you. We are in this English learning effort together. There is not a “ghost of a chance” that I will leave. I will keep with it to the end.

Did you catch our next ghost expression? If something doesn’t have a ghost of a chance, it is extremely unlikely that it is going to happen.

Now our next ghost expression has to do with towns -- empty towns.

If everyone leaves, a town becomes a “ghost town.” It is a place that no longer has any people living in it or at least very few. It is abandoned. The businesses have all closed and the people no longer have a way to make a living. So, they leave.

To me, an abandoned ghost town is a much sadder, emptier place than a town full of ghosts would be. Ghost-hunting tourists would probably enjoy visiting a town populated only by ghosts, especially on Halloween!

But even a ghost town can be a good place for some workers. For example, writers. A writer just needs a computer.

This would be especially good for ghostwriters. A "ghostwriter" writes books or stories for someone else using that person’s name, not their own.

Let’s say one of the ghost-hunters wants to write a book about her ghost-hunting adventures. But she is not a very good writer. She could pay a ghostwriter to help her write her ghost stories!

A "ghost from the past" is something unwanted or haunting from your past that comes back to you. Here is another example. If that man or woman who ghosted you years ago, comes back into your life -- they would definitely be a ghost from the past -- someone you don't want to see again.