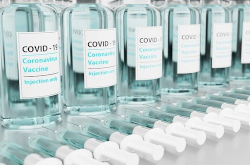 The word “vaccine” can bring out emotions and discussions in ways it never did before the start of the pandemic.

In some countries, new variants are spreading as COVID-19 vaccines have yet to arrive. In others, shots are wasted as citizens fight against the government’s vaccination requirements.

“Vaccine” has come to represent not just scientific progress but also political divisions around the world. That is why two major dictionary publishers have chosen "vaccine" and "vax" as the 2021 words of the year.

“One is the science story, which is this remarkable speed with which the vaccines were developed. But there’s also the debates regarding policy, politics and political affiliation. It’s one word that carries these two huge stories,” he said.

Lookups, or searches, for the word vaccine increased 1,048 percent on Merriam-Webster’s website from 2019 to 2021. Debates over who is able to get the vaccine, vaccine requirements and additional shots kept interest high, Sokolowski said. So did concern about the safety of the vaccines and vaccine passports.

Although people looked up the word on the internet a lot all year, searches rose 535 percent in August, Merriam-Webster said. At that time, there was a lot of news about vaccine requirements and vaccination rates, the publisher said.

Across the Atlantic Ocean, Britain’s Oxford English Dictionary named “vax” as its word of the year for 2021. “Vax” is an informal word that can mean the noun “vaccine” or the verb “vaccinate.”

Researchers at the Oxford University Press released a report about how “vaccine” affected the English language over the past year. The report said it is rare for a subject to affect language so much in such a short period of time.

“Vaccine” comes from the Latin word “vacca,” which means “cow.” The word was first used to describe inoculation. That word described a process of using small amounts of cowpox to prevent small pox, explained Merriam-Webster on its website. In English, the word “vaccine” started being used in the 1880s.

Some say the word “vax” started to appear in the 1980s. Oxford researchers found that the word was not used often until this year. By September, “vax” was being used over 72 times more often than at the same time last year.

“Vax” is used in informal ways, in terms such as “vax sites” and “to get vaxxed.” The word “anti-vaxxer” refers to a person who is against receiving a vaccine.

Britain’s Cambridge dictionary chose the word “perseverance” as the 2021 word of the year. Perseverance is a continued effort to do something, even when it is difficult or takes a long time.

The word “perfectly captures the undaunted will of people across the world to never give up, despite the many challenges of 2021,” Cambridge said on its website. Lookups of the word also greatly increased in February when NASA’s Perseverance Rover landed on Mars.

Collins Dictionary, however, selected “NFT,” which has nothing to do with the pandemic, as its word of the year. “NFT” is a short form for the words: non-fungible token. The term means a unique electronic identifier that records ownership of electronic property. NFTs have grown in popularity in 2021.