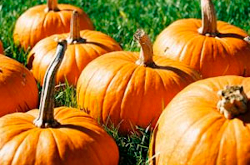 
Many Americans/ celebrated Halloween/ on Monday/ by placing pumpkins/ outside their homes. A Halloween tradition/ is to cut a face/ into the big, round squash.

Pumpkins/ are also an important part/ of the Thanksgiving holiday/ in late November. Tradition says/ early settlers/ ate pumpkin pie, or something similar to it, with the Native Americans/ during the first celebration.

Pumpkins/ are members/ of the gourd family. They are related to/ melons, cucumbers and squashes. They are, like all of their relatives, fruit, not vegetables. Pumpkins/ have firm flesh, seeds in the center/ and a shell/ that is usually orange. And/ they contain more vitamin A/ than almost any other fruit.

Pumpkins/ have been grown/ for thousands of years/ in North and Central America. They have been grown/ for so long, in fact, it is unclear/ what wild relative/ the plant has. Pumpkins/ grow on vines/ or bushes. Most pumpkins/ weigh a few kilograms, but some/ have reached/ well over four hundred fifty kilograms.

Pumpkin flowers/ are usually fertilized/ by bees. The insects/ carry reproductive material/ called pollen/ from the male/ to the female flowers. No fruit/ will grow/ if the female flower/ is not pollinated/ at the right time.

Closely related squashes and gourds/ can also fertilize pumpkins. This cross-pollination/ will show itself/ not in the current year’s pumpkins, but in seeds/ grown the following year.

Pumpkin/ is used in pies, breads, cakes/ and other baked goods. Baked pumpkin seeds/ are also a popular food. Pumpkin filling/ for pies/ is produced industrially.

Pumpkins/ are very low/ in acid, unlike many fruits. This makes canned pumpkin/ a place/ where the bacteria/ that causes botulism food poisoning/ can grow. For this reason, experts say/ it is not a good idea/ to can crushed pumpkin/ at home. Whole pumpkins, however, store well/ in cool, dark places/ for weeks.

Less than one percent/ of the American pumpkin supply/ is imported/ or exported. Most pumpkins/ are used/ in the states/ where they are grown. Prices/ can be very different/ from place to place.

American farmers/ grew over four hundred fifty million kilograms/ of pumpkins/ last year. The crop/ was valued/ at about one hundred million dollars.