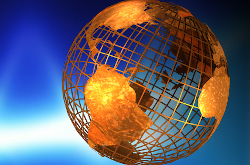 
The World Future Society/ has published a special report/ about forces/ changing the world. The report/ is by Marvin Cetron, president of Forecasting International in Virginia, and Owen Davies, a writer. It is called "Fifty-three Trends/ Now Shaping the Future."

One of them/ is population growth. The report says/ the world/ is expected to have more than nine thousand million people/ by the middle of this century. Areas/ likely to experience the largest increases/ include the Palestinian territories, Niger, Yemen and Angola.

Population growth/ in many industrial nations, however, is expected to drop. But medical progress/ helps their people/ to live longer lives.

International migration/ is also shaping the future. The report says/ there is some resistance, but also growing acceptance/ of cultural differences. Migration/ is mixing different peoples/ and, in its words, "forcing them/ to find ways/ to co-exist peacefully and productively." This is said to be true/ especially among younger people.

The world economy/ is also becoming more integrated. The report notes, for example, that companies/ in high-wage nations/ are increasingly sending jobs and services/ to low-wage countries. At the same time, the Internet/ lets businesses/ search worldwide/ for materials/ at the lowest cost. In some cases, the Internet/ can even help small companies/ compete against big ones.

On another issue, the report warns/ that militant Islam/ will spread/ and gain more power. It notes/ that extremists/ are angered/ by the overthrow of the Taliban/ in Afghanistan/ and Saddam Hussein/ in Iraq. As a result, it says future revolutions/ may be more likely/ instead of less likely.

On the issue of energy, the use of oil/ is expected to reach one hundred ten million barrels a day/ by two thousand twenty. That is up from more than eighty million now. The report/ dismisses a popular belief/ that the world/ is about to run out of oil. It notes estimates by OPEC/ that the eleven member nations/ still have about eighty years of oil/ left. And it says/ production/ can still expand/ in other countries/ such as China, Russia and Kazakhstan.

The World Future Society/ describes itself/ as a scientific and educational organization/ with about twenty-five thousand members. It is based/ in the American state of Maryland.