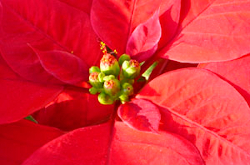 
In many colder northern countries, poinsettias/ are a sure sign/ that Christmas is near. Nearly/ all sales/ of this flowering plant/ come at wintertime. Yet/ the poinsettia/ is native to Central America/ and needs warm weather/ to grow.

Red poinsettias/ are the best known. But there are about one hundred different kinds, and they come in several colors. Here is/ how the poinsettia/ became one of America’s most popular flowers:

The botanical name/ for this plant/ is Euphorbia pulcherrima. In Latin, that means “most beautiful euphorbia.” There are hundreds of members of the euphorbia family. Rubber trees, trees that produce castor/ and tung oil, and the cassava -- an important root crop -- are all members of this family.

Wild poinsettias/ can grow to four meters/ in size. They contain latex, like rubber trees. The flowers of the poinsettia/ are very small. Around the flowers/ are colorful leaves/ called bracts. These make the plant/ popular.

In the nineteen twenties, Albert Ecke/ and his son Paul/ became interested/ in the poinsettia’s ability/ to flower in winter. Paul Ecke thought/ it would be good/ at Christmastime. The two/ started a farm/ near Encinitas, California.

At first Paul Ecke, and later his son, Paul Ecke Junior, grew large plants/ in fields. Then/ they sent them/ to growers/ by train. Growers/ could divide the large plants/ into cuttings, to raise smaller ones/ in greenhouses/ until the holidays.

In the nineteen sixties/ came poinsettias/ that grew best/ in containers. The Eckes/ started to sell cuttings/ from these new plants.

Poinsettias/ are the most popular potted flowering plant/ in America, with sales last year/ of about two hundred fifty million dollars.