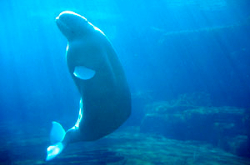 
For thousands of years, people/ have wanted to explore the world/ under the sea. Such activity/ was not possible/ until modern times. Today, divers/ can survive/ for hours/ underwater/ and photograph fish and other sea creatures.

Not everyone/ can swim with fish/ in the ocean. But they can enjoy underwater life/ in another way -- by visiting an aquarium.
Under the sea, under the sea.
Darling, it’s better
Down where it’s wetter
Take it from me

Experts/ do not really know/ when people began keeping fish/ as pets. But they say/ that people have been interested in fish/ for thousands of years. Some say/ the ancient Sumerians/ were the first civilization/ to keep fish/ in ponds/ more than four thousand years ago. The Chinese/ kept and studied carp and goldfish/ more than one thousand years ago. The ancient Romans/ kept eels/ as pets. And the Greek philosopher Aristotle/ made what is believed to be the first known study of sea life, including sharks and dolphins.

Experts say/ that keeping fish/ at home/ in small water tanks/ called aquariums/ is extremely popular/ today. And everyone/ seems to enjoy visiting huge public aquariums/ that have opened/ around the world.

By the middle of the eighteen hundreds, science/ had shown/ that plants, fish and other sea creatures/ could survive together/ under water. So it was no longer necessary/ to change the water/ in a tank/ for fish/ to live there. This led to the building/ of the first public aquariums.

The first one/ opened in London, England in eighteen fifty-three. In the next fifteen years, other aquariums/ opened in Europe and the United States. By nineteen twenty-eight, there were about forty-five public aquariums.

Today, millions of people/ visit aquariums/ around the world. Jane Valentine/ is an official/ with the American Zoo and Aquarium Association. She says/ the United States/ has more than seventy-five public aquariums. And she says/ that about forty-seven million people/ visit these places/ each year.

One of the most famous aquariums/ is in Monterey, California. Officials say/ the Monterey Bay Aquarium/ has been recognized/ as the finest aquarium/ in the United States. It is in a building/ that used to be a kind of factory/ called a cannery. This was where workers prepared fish/ and placed them/ in cans/ to be sold.

The Monterey Bay Aquarium/ shows visitors/ the underwater life/ in the bay. Scientists/ at the aquarium/ also study the animals/ and work to help many survive.

For example, the Monterey Bay Aquarium/ cared for nineteen penguins/ from New Orleans, Louisiana. They were rescued/ after hurricane Katrina struck the area/ in two thousand five. These penguins/ were kept/ until they were ready to be returned/ to the Audubon Aquarium of the Americas.

The Monterrey Bay Aquarium/ also works to save the sea otter. Aquarium workers/ rescue lost or hurt young sea otters/ and prepare them/ to survive in the wild. The ones/ that cannot be released/ are kept in the aquarium/ and entertain visitors/ by swimming quickly/ and playing tricks/ in the water.

Visitors/ especially enjoy watching them/ play with objects/ in the water. When sea otters/ find new objects, they smell them, hold them, play with them/ and hit them/ against other hard objects. The otters/ hit their toys/ against the walls/ of the tank/ in front of the happy visitors.

At the center of the Monterey Bay Aquarium/ is a huge tank/ more than eight meters high. It is one of the tallest aquarium exhibits/ in the world.

The tank/ holds more than one million liters of seawater/ and many different kinds of fish. It also holds more than one hundred kinds of plants. Officials say/ the tank/ was built in the center/ of the aquarium/ because it would get the most sunlight/ each day. All this sun/ helps the plants/ grow -- about ten centimeters/ every day. An official says/ the Monterey Bay Aquarium/ was the first aquarium/ in the world/ to show a living kelp forest.

A kelp forest/ is a kind of ecosystem established/ around colonies/ of a seaweed plant/ called kelp. Kelp/ can extend/ between two and thirty meters or more/ from the sea floor/ to the surface of the water. These plants/ provide homes/ to many fish/ and other sea animals.

The aquarium/ is also an education center. Workers/ help visitors and especially children/ understand sea creatures/ and their importance/ in the world. Children and adults/ can see many sea creatures/ being fed/ and watch a movie/ about underwater life. They can even touch some of these creatures/ in small tide pools. Workers/ make sure visitors/ touch the rays, crabs and sea stars/ very carefully.

One extremely large public aquarium/ opened in Atlanta, Georgia/ in two thousand five. The Georgia Aquarium says/ it is the largest/ in the world. It has more than one hundred thousand sea animals/ in thirty million liters of water. These include two whale sharks -- the world’s largest fish.

The Georgia Aquarium/ is divided into sixty different environments/ called habitats. The largest/ holds more than twenty-two million liters/ of water. It was especially designed/ for the whale sharks/ and the thousands of other animals/ that live/ in the ocean. The second largest habitat/ was designed to copy the natural environment/ of beluga whales.

Building large public aquariums/ is very costly. Most of the money/ to build the Georgia Aquarium/ was provided/ by businessman Bernard Marcus. He and his wife/ gave two hundred fifty million dollars/ to help pay for the building. The total cost/ was two hundred ninety million dollars. Reports said/ that more than one million people/ visited the Georgia Aquarium/ in the first six months/ that it was open.

Another aquarium/ re-opened in two thousand five/ in Camden, New Jersey. The Adventure Aquarium/ first opened in nineteen ninety-two. It spent about fifty million dollars/ to expand its building/ and improve its exhibits.

One exciting area/ of the aquarium/ is the shark tunnel. Visitors/ can watch twenty-six dangerous creatures/ up close/ without fear. The tunnel/ is suspended/ in the middle of the shark tank.

Even more exciting for visitors/ is the chance/ to get in the water/ and swim with the sharks! Swimmers/ wear special clothes/ and must follow a few rules. For example, they must not make the sharks/ angry/ or make any quick movements. Swimming/ with the sharks/ costs more than one hundred dollars.

Another aquarium/ that provides education and adventures/ with sharks/ is the National Aquarium/ in Baltimore, Maryland. The Baltimore Aquarium/ has more than ten thousand sea animals. It opened in nineteen eighty-one.

Its shark adventure/ includes a tour/ with an expert/ to learn about these ancient creatures/ and how the aquarium workers/ feed and care for them. Children/ can even sleep/ near the sharks/ overnight. Children/ sleep in the viewing area/ as sharks sleep nearby, behind protective glass.

The National Aquarium/ in Baltimore/ also presents/ a dolphin show. It shows/ how young dolphins/ learn and develop the skills/ they need to survive.

Aquariums/ provide the public/ with many chances/ to experience life/ under the sea. These fun and educational places/ can be found/ in most areas/ of the world. Visiting an aquarium/ is a good way/ for children/ to learn about sea creatures. They might even want to start an aquarium/ at home/ and join the millions of people/ around the world/ who keep fish as pets.