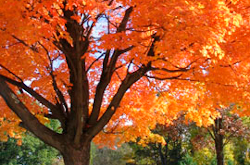 
The northeastern state of Vermont/ is the leading producer/ of maple syrup/ in the United States. This sweet, sticky liquid/ is a favorite/ on pancakes/ and other foods/ generally eaten/ in the morning.

The United States Department of Agriculture says/ Vermont/ produced more than one and one-half million liters of it/ this year. That was almost one-third/ of the nationwide amount/ and was worth more than eleven million dollars. Other big producers/ include Maine and New York State.

Paul Limberty/ has been producing maple syrup/ in Vermont/ for ten years. The process/ is called sugaring. Each February, Mister Limberty and his wife, Jennifer Esser, drill holes/ into their sugar maple trees. They have more than one thousand sugar maples/ on their property/ in Huntington.

They collect the sap/ that flows from the holes, through pipelines/ and into tanks. Sap/ can flow/ in two directions -- up from the tree's roots/ or down from its branches.

The next step is/ they boil the harvested sap/ in a wood-fired evaporator. They use wood/ that they collect/ throughout the year/ when they remove dead or overcrowded trees/ on their property.

The boiling season/ generally lasts/ from March through April. Boiling/ steams away water/ in the sap. All that is left/ is maple syrup. Paul Limberty and Jennifer Esser/ produce four grades of it.

Vermont Grade A Fancy/ has a light golden color/ and a light maple taste. It is often made/ at the beginning/ of the boiling season.

Grade A Medium Amber/ is a popular choice/ for the table. Grade A Dark Amber/ has a deep golden color/ and a strong maple taste.

Grade B/ is the darkest and strongest tasting/ of the four. It is often made/ during the last days/ of the boiling season. Grade B/ is considered best/ for use/ in cooking/ and baked goods.

Paul Limberty and Jennifer Esser/ call their operation/ Dragonfly Sugarworks. They produced one thousand seventy-nine liters/ of maple syrup/ this year. And the price/ per liter/ is about the same/ for all grades -- about fourteen dollars.