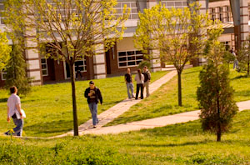 
More than five hundred sixty thousand foreign students/ attended an American college or university/ during the last school year. It was the seventh straight year/ with more than half a million international students/ in the United States.

Last year's group/ was about the same size/ as the year before -- which was good news/ for schools. Why? Because the number of students/ coming to the United States/ had been falling/ for two years.

Today, in our Foreign Student Series, we present numbers/ from the latest "Open Doors" report. The information/ is from the Institute of International Education, based in New York.

India/ again sent the most students/ in the school year/ that began/ in autumn/ of two thousand five. India/ passed China/ in two thousand one/ as the leading sender/ of foreign students/ to the United States.

American schools/ last year/ had more than seventy-six thousand Indian students. That was a five percent drop/ from the year before -- the first reduction/ since nineteen ninety-six.

China/ had more than sixty-two thousand students/ in American schools, roughly the same/ as the year before.

South Korea/ was third/ with an increase of ten percent. And Japan/ was fourth -- but with an eight percent drop.

For the fifth year, the school/ with the most foreign students/ was the University of Southern California/ in Los Angeles. It had almost seven thousand.

There were fewer international students/ in computer science and engineering/ last year. But there were more/ in areas/ including art, health/ and intensive English language.