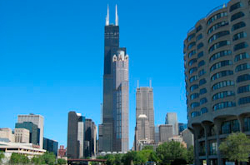 The tower/ rises more than four hundred forty meters -- five hundred ten/ if you add the two broadcasting towers/ on top. Either way, it stands/ as a tall, dark presence/ over the area of Chicago/ known as the Loop.

The facing material/ is black aluminum. The windows/ are bronze colored glass. The building/ has one hundred ten floors.

Sears, Roebuck/ was once the nation's leading operator/ of department stores/ and a mail-order business. Its competitor Kmart/ bought the company/ in two thousand five.

Most of the Sears Tower/ is office space. But/ people/ also live in apartments/ and there are stores and restaurants.

The building/ has an observation area/ called the Skydeck. On cloudy days, people/ on the street/ cannot even see all the way/ to the top of the Sears Tower. But on clear days, visitors/ to the Skydeck/ can see three other states -- Indiana, Michigan and Wisconsin.

Explanations of the sights/ appear in English, Spanish, Polish, French, Japanese and German. And there are windows/ placed low, at eye level/ for children.

People/ also can see local sights/ like the Millennium Park/ and the shining white Wrigley Building/ along the Chicago River. They can watch the ships/ on Lake Michigan. And, in the summer, they can follow the little dots/ that really are people/ swimming, or sailing in boats/ with colorful sails.